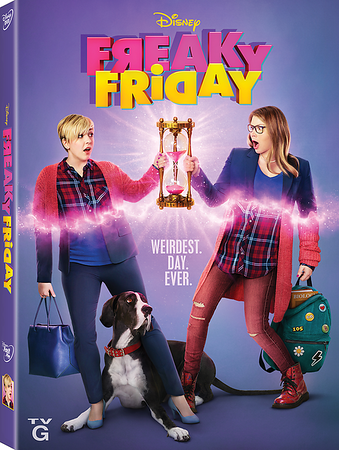 A contemporary musical update of the classic comedic story, FREAKY FRIDAY is based on the Disney Theatrical Productions stage adaptation of the celebrated novel by Mary Rodgers. The DCOM will debut on Disney Channel but it’s also coming to the home market!

Teenager Ellie Blake (Cozi Zuehlsdorff) and her mom Katherine (Heidi Blickenstaff) are complete opposites and often clashing with one another. Ellie really misses her dad who passed away a few years ago; she bickers with her younger brother and argues with Katherine who’s getting ready to marry her fiancé, Mike (Alex Désert) – tomorrow.  As mother and daughter quarrel, they accidentally break the treasured hourglass given to Ellie by her father and then, suddenly, they magically switch bodies. Ellie and Katherine trade places for one crazy day!  The film also stars Ricky He as Adam and Jason Maybaum as Fletcher.

REVIEW: ‘MICKEY MOUSE: MERRY & SCARY’ is as great option to keep around for the season!