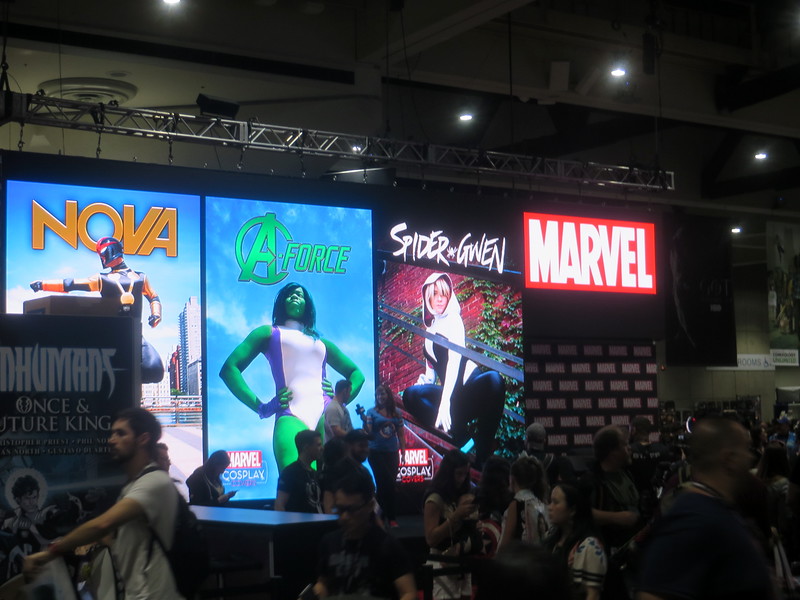 Even though Marvel Studios will not have a high-profile presence at Hall H this year, there’s still a lot going on for fans at 2018 San Diego Comic-Con for fans of all things Marvel.

Here’s a look at the full schedule of offerings:

Freeform is bringing Marvel’s Cloak & Dagger to “The Experience” at Petco Park. Starting July 19th at 10am, fans will have the opportunity to engage with two different interactive activations over the course of four days.

Tying into the “divine pairing” theme from Marvel’s Cloak & Dagger, Freeform will recreate the iconic moment between the two leads Tyrone and Tandy when their powers interact. To recreate this, Freeform is fabricating a physical experience where participants are harnessed to a bungee that will propel them backwards from the force of their powers. A slow-motion recording will capture the moment which will also include an overlay effect that shows both the light and dark energy emitting from the participants. Fans will have the opportunity to share their videos on social media.

Fans can also stop by the ROXXON Corp station to create their own customized ROXXON Corp badge and lanyard. Each badge will include a secret code that is connected to a wide range of prizes from Sony PlayStation Vue and Freeform. After receiving their customized badge, fans will be able to pose for a photo with the ROXXON Corp sign.

Marvel Rising brings together the next generation of Marvel Super Heroes for the next generation of Marvel fans. This is your chance to be among the first to see a sneak peek of this group of powered teens and their adventures that are full of heart, action, comedy, and powerful messages for every kind of Marvel fan. Join our Quake Chloe Bennet (Marvel’s Agents of S.H.I.E.L.D., Nashville) our Squirrel Girl Milana Vayntrub (This Is Us, Silicon Valley), our Ms. Marvel Kathreen Khavari (Big Little Lies, Marvel’s Avengers), our Patriot Kamil McFadden (K.C. Undercover, Grown Ups 2), Mairghread Scott (Writer, Marvel Rising), Cort Lane (SVP, Animation and Family Entertainment), Marsha Griffin (VP, Animation Current Series and Development), and Sana Amanat (VP, Content and Character Development) as well as additional surprise guests for an action-packed panel that will showcase the first look of the animated shorts, special announcements, and so much more.

Be among the first to get the exclusive inside scoop on what’s in-store for season two of Marvel’s Iron Fist as Danny Rand and Colleen Wing set off on a new adventure as the protectors of lower NYC. Join Executive Producer and Marvel’s Head of Television, Jeph Loeb, and surprise guests in what is sure to be a high-octane panel you don’t want to miss!

San Diego, here we come! Hosts Lorraine Cink, Langston Belton and Ryan Penagos give you a sneak peak of everything that Marvel has to offer – at SDCC and beyond!

Marvel cosplayers assemble! Bring your latest and greatest Marvel cosplay for this annual event where you can show off your duds on the Marvel booth stage!

Cool #seeeekrits revealed? Totally possible! An hour of fun stories and chit-chat with awesome people from Marvel? You better believe it! Join co-hosts Ryan “Agent M” Penagos and Jamie “Hasn’t Picked a Super Hero Name Yet” Frevele as they talk with Marvel editors, writers, and creatives about their Marvel origin stories, favorite story arcs, and more in this very special live episode of the This Week in Marvel podcast!

This Week in Marvel Live from the Marvel Stage
10:30am PT

Join host Ryan Penagos, along with some special Marvel guests, to discuss some of the exciting work going on at Marvel.

(EXTENDED SEASON 2 SNEAK PEEK)- From 20th Century Fox Television in association with Marvel Television, season 2 of The Gifted picks up after the explosion of the Atlanta Station.  The Mutant Underground search for their friends and family who left with The Inner Circle. Having tracked them outside of Washington, D.C., they must contend with new groups with extreme ideologies, both human and mutant alike, to stave off a brewing conflict.  Join executive producers Matt Nix and Marvel’s Jeph Loeb along with stars Stephen Moyer, Sean Teale, Jamie Chung, Emma Dumont, Blair Redford, Natalie Alyn Lind and Skyler Samuels for an exclusive first-look at the upcoming second season; returning Tuesdays this Fall on FOX.

Join celebrity chef Justin Warner and a special guest as they make a con-tastic snack inspired by Mr. Fantastic.

Join us for our annual Marvel cosplay competition.  For official rules: marvel.com/SDCCCostumeContest

Across comic books, television, new media and more – the Women of Marvel are here! Join the conversation as this diverse and talented group of women to discuss the creative process, what it’s like working as a woman in comics today and what it means for the future of the industry! Panelists include Kat Khavari (Ms. Marvel voice actor), Milana Vayntrub (Squirrel Girl voice actor), Mairghread Scott (Marvel Rising feature writer), Kristi Reed (Marvel Rising voice director) and G. Willow Wilson(writer and co-creator for Marvel Rising), moderated by Sana Amanat (VP, Content and Character Development, Marvel) and Judy Stephens (Producer, Marvel).

Marvel Animation returns for the always action-packed, news-breaking panel where you’ll get eyefuls of never-before-seen information and sneak peeks… plus…as always…some surprise guests that’ll reveal waaay too much! GET THERE! You’ll also have a chance to meet the stars of your favorite Marvel Animation series at signing events at the Marvel booth (#2329) throughout the weekend.

Legion, is the story of David Haller, a man who believed himself to be schizophrenic only to discover that he may actually be the most powerful mutant the world has ever seen. Along with a team of other extraordinarily gifted people, David learned to accept his true self and set out to defeat The Shadow King, who was on a path to attaining infinite and world-ending power. In season two, a series of mind-bending twists and turns called into question who is the hero, and who is the villain. Legion is based on the Marvel Comics by Chris Claremont and Bill Sienkiewicz. Join Executive Producers John Cameron and Marvel’s Jeph Loeb, along with co-EP, Nathaniel Halpern, plus cast members for a conversation on what to look forward to from Season 3.

Join us for our annual Marvel kids’ costume event!

Join Ryan Penagos and Jamie Frevele as they talk comics with special guests and inspire the creation of live Marvel coffee art.

*** Please note that signings are ticketed events and passes will be available to win on a first-come, first-served basis beginning at 9:15 AM onThursday, July 19, Friday, July 20 and Saturday, July 21 at the Marvel Booth (#2329).