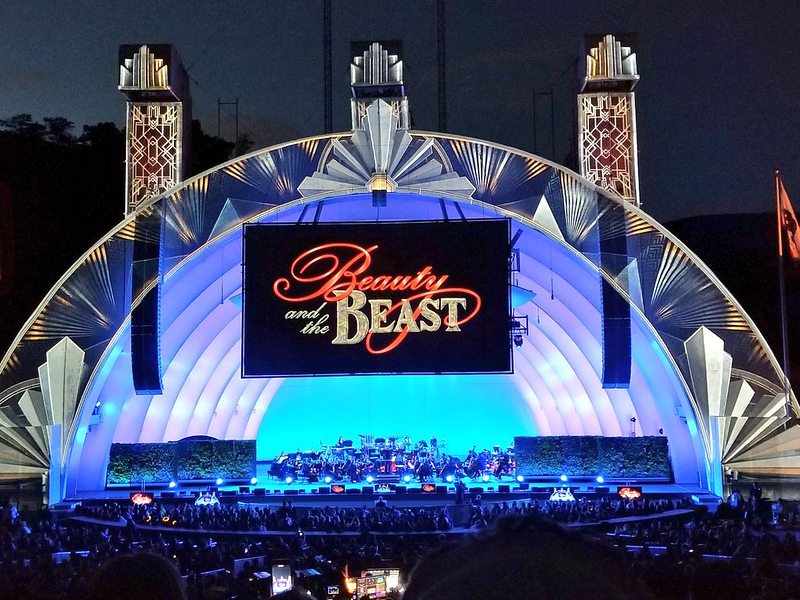 The weather was perfect last weekend for an evening under the stars as one of Disney’s most romantic tales (as old as time) came to life at the Hollywood Bowl for Beauty and the Beast in Concert. The Disney animated classic lit the night with live singing and music accompanying a screening of the film and paired with some dazzling multimedia.

As to be expected, the live orchestra and choir led by conductor Michael Kosarin were delightfully magical. It’s easy to take for granted that they performed all of the musical so flawlessly that it’s easy to just assume the audio track was being played. One awesome detail about the orchestra that night was that several of the musicians actually worked on the film for the film in the early 1990s! What a great way to come full circle!

Anthony Evans delivered the nights most impressive vocals singing the Beasts “Evermore” solo from last year’s live-action adaptation. That song, along with “Human Again” — sung hilariously by Marissa Jaret Winokur as the Wardrobe — were additions to the lineup that were not originally featured in the animated feature. Both stage pros delivered flawless performances.

Jane Krakowski, Rebel Wilson, and Kelsey Grammer were also true standouts on the opening night playing Mrs. Potts, LeFou, and Lumiere, respectively. Each brought a gusto and zest to the familiar roles that suited not only their own personas but also the characters that accompanied them on the screen.

Krakowski‘s rendition of “Beauty and the Beast’ was soft, gentle, and comforting. Ever just as sure as the song will give goosebumps, she delivered the impressive solo of the well-known tune, seemingly with ease. Wilson and Gammer were absolutely fantastic making you really wish that their characters had more screentime with vocals. Wilson in particular — who equally relished her time on that same stage as Ursula in The Little Mermaid in Concert two years ago — is clearly a Disney fan and her energy is infectious on stage as she sang in both “Gaston” and “The Mob Song”. Grammer delivered surprisingly suitable vocals with a twinge of that familiar French accent in “Be Our Guest” with great gusto and clearly a lot of enjoyment.

Zooey Deschanel seemed to be a perfect fit as Belle but her quirky personality was perhaps a bit TOO quirky and she seemed disconnected from the moment; even to the point of forgetting a few lines during the reprise of “Belle.” Taye Diggs was suitable as Gaston but far from memorable.

What was surprisingly memorable was the projection mapping on the Hollywood Bowl facade that accompanied the entire movie. Simple backdrops and animations were projected on the surfaces surrounding the stage and were accompanied by beautiful lighting that accented the performances and the screen-time quite well.

Alan Menken made a not-so-surprise appearance at the end of the presentation to talk a little about creating the music for the film and he played a few quick numbers; a true delight for any Disney fan. The only thing missing was a bit of pyro. Surely, you don’t need fireworks but when it comes to Disney you almost sort of anticipate it.

With a few forgivable foibles, Beauty and the Beast in Concert was a true delight.

Live Tweets From the Evening