One of the most anticipated panels and the very last panel of the D23 Expo was the Legends of Walt Disney Imagineering. Hosted by self-proclaimed Disney geek John Stamos, it was one of the best panels all weekend. The chemsistry between Stamos and the Imagineers was truly magnetic. They had a great rapport and it was a joy to hear them talk about the legends of imagineering. Stamos himself is a big fan and it’s obvious in his reverence to the entire evening. Stamos talked briefly about his love of Disneyland, and how he grew up at the parks. He said if he could go back in time and tell his 14-year-old self he would say, “It’s going to be ok, one day you will be moderating a panel at D23, you won’t have to wait in line, and you know that sign that used to be on Harbor? Well, it’s in your backyard now.”

After his adorable geek out, John introduced Disney Legends Tony Baxter and Marty Sklar. Stamos started with Sklar calling him the keeper to the keys of the kingdom, and the Jimmney Cricket of Imagineering. Sklar started a month before Disneyland opened as a writer for the Disneyland newspaper. He said, “thank god Walt liked my writing or else, I would have been fired.”

Then Stamos introduced Tony Baxter who got his start on Main Street as an ice cream scooper at Carnation Plaza. He created so many beloved attraction like Big Thunder Mountain, Indiana Jones, Splash Mountain, and Journey into the Imagination at Walt Disney World. The success of Indiana Jones let him to get his own action figure based on the attraction. Tony then teased that Stamos also had his own action figure too for FULL HOUSE.

Both him and Sklar worked together on then EuroDisney or better known now as Disneyland Paris. Sklar then went on to talk about the important role Richard Irvine would have with the company. Walt had hired him to be an Art Director to help construct Disneyland. He became a key figure in Imagineering and helped design Walt Disney World which he unfortunately died before he got to see complete. Baxter then talked about fellow Imagineer and Disney Legend, Harper Goff. He worked on The Jungle Cruise, and designed the entire look for the movie 20,000 LEAUGUES UNDER THE SEA. He also worked with Baxter on what would have been Discovery Bay. He also takes credit for the beautiful design of World Showcase at EPCOT.

At the end, new DIsney Legend Wayne Jackson took the stage with Sklar and Baxter, and as a huge surprise he was given a golden castle statue on behalf of Tokyo Disneyland and the Oriental Land Company for his work there. It was presented by Bob Weiss.

The hour went by way to fast, and it was filled with once in a lifetime stories, and laughter from three of the biggest Imagineering Legends. 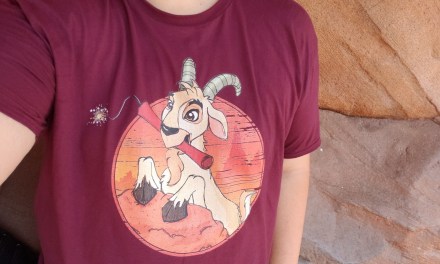