During the Parks and Resorts panel for the D23 Expo 2017, Disney revealed and confirmed details for several upcoming changes to Epcot at Walt Disney World. Many we’d heard rumblings of, a few we’d hope for, and even a few things that flew mostly under the radar until the review.

Walt Disney Parks and Resorts Chairman Bob Chapek noted that with Epcot specifically, they find over and again that guests are wanting more “Disney” in the park. At the same time, Disney wants to stay true to the spirit of the original park and so the shift for Disney with Epcot’s new positioning is to stick to the mission of the park while also making it distinctly more Disney, timeless and family-friendly. He was joined by Imagineer Tom Fitzgerald to go over some of the announcements.

Part of this shift in goals was evident with the recent opening of the FROZEN EVER AFTER attraction in the Norway Pavilion; it replaced the former Malestrom flume attraction previously themed to fairytale trolls popular in Norway. Now the new changes aim to hover in the zone of the park’s original spirit but with a much more liberal application of intellectual properties thrown into the mix.

With this confirmed new focus for the park, several teaser announcements about what guests can expect to come were revealed…

A much needed redesign is coming to the entrance for Epcot leading up to Spaceship Earth. There was not a lot of details revealed but they did flash a quick look at a concept rendering.

Disney is aiming to stay true to the spirit of the park and its celebration of creativity and ingenuity. Always a place where the real becomes fantastic (explore space or the deep sea) or the fantastic becomes real (talk with Crush, Soarin’ Around the World, etc.) Patterned after the number one family attraction at Disneyland Paris, Ratatouille will be added in an all-new space at the France pavilion in the World Showcase.

It was confirmed that the attraction would go in a new space behind the Eiffel Tower.

Disney is also developing an enhancement with their Circle Vision concept with new digital technology to create a brand new digitally seamless video for the Wonders of China attraction.

New Guardians of the Galaxy Attraction

Epcot will also see the addition of a brand new E-ticket attraction based on the rockin’ and action-packed world of Guardians of the Galaxy, the next step in how guests can encounter these characters at Walt Disney World Resort.

Although Disney did not confirm where the attraction will be located, new concept made it certain that the ragtag group of anti-heros would be taking over the current Ellen’s Energy Adventure.

Part of the tie-in for the Guardians attraction was a new conceit that Peter Quill visited Epcot as a kid. In Future World, a new Green Mission at Mission: SPACE will take guests on a stunning tour around the Earth, and an updated Orange Mission will make the trip to Mars even more spectacular.

We’ve also learned in recent days that the missions will be re-labeled from slightly confusing GREEN and ORANGE names to EARTH and MARS, indicating easier and more intense versions of travel. The new gentler Earth version of the attraction will allow “younger kids can enjoy the adventure for the very first time,” according to Fitzgerald.

Adjacent to Mission: Space will be a new restaurant that will invite guests to travel high above the earth for an unforgettable dining experience at a new table service restaurant. 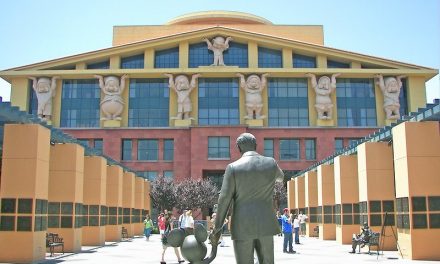 Marvel invites you to get your first look at Star Wars: Galaxy’s Edge this April!