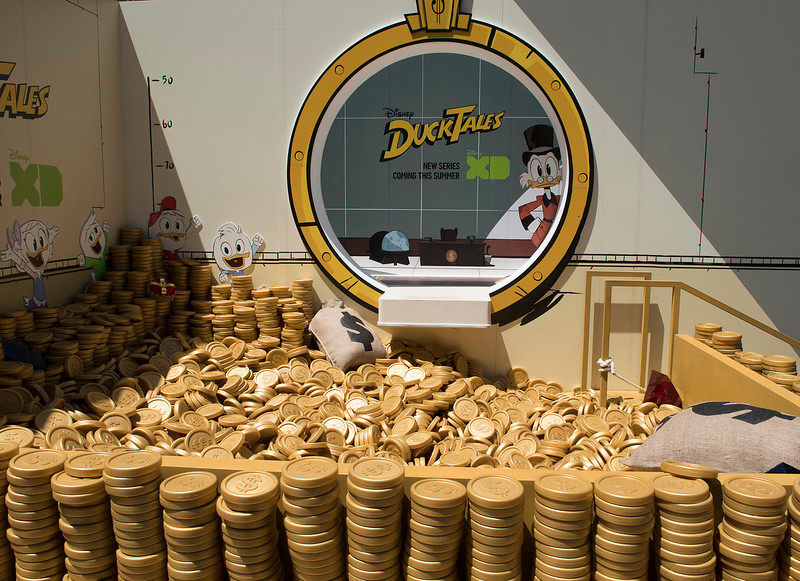 D23 Expo confirmed today a bunch of fun one-of-a-kind family experiences that will be made available during the 2017 event taking place FRIDAY, JULY 14–SUNDAY, JULY 16 at the Anaheim Convention Center in Anaheim, California.

The lineup includes star-studded Q&A panels featuring the talented voice casts of Disney XD’s highly anticipated DuckTales series and Disney Channel’s Tangled: The Series, plus a special appearance by the stars and director of the upcoming Disney Channel Original Movie Descendants 2. Disney Channel and Disney XD cast members from Stuck in the Middle, Bizaardvark, K.C. Undercover, Walk the Prank, and MECH-X4 will greet fans at the D23 Expo’s Talent Central throughout the weekend.

The one-and-only Scrooge McDuck’s Money Bin, located on the show floor, will provide the priceless opportunity for fans to dive into more than 30,000 plastic gold coins and “swim” away with a professional 180-degree video capture to share with friends. The new DuckTales series premieres this summer on Disney XD, in the 30th anniversary year of the Emmy® Award-winning original series treasured by a generation.

Fans are invited to join the stars and creative team of Disney Channel’s Tangled: The Series for a Q&A panel as they share some of the magic behind bringing the series to life.  Mandy Moore and Zachary Levi, who reprise their roles as Rapunzel and Eugene (AKA Flynn Rider) from Walt Disney Animation Studios’ acclaimed feature film, will be joined by executive producer Chris Sonnenburg, co-executive producer Ben Balistreri, and Broadway stars Eden Espinosa(Cassandra) and Jeremy Jordan (Varian).  The panel will take place from 10:30–11:30 a.m. on Stage 28.