Although MOANA did not get any Oscar love at the recent Academy Awards, it’s no secret that we absolutely adored this film. We have a soft spot for Disney Princess films and while Disney has certainly found a certain magic with castles and magic, they’ve broken the mold here with this tale of a Polynesian princess whose kingdom is the far reaches of the entire Pacific ocean.

Auli’i Cravalho is the perfect Disney princess. She is equal parts lovingly sweet girl and tenacious go-getter. While her personality may at this point seem slightly derivative next to all of her other strong-minded princess-folk, she is a tough cookie and spends no time worrying or waiting for a prince to come around.

What helps to temper a predictable “tough but determined” princess was also the fact that despite striving to chart the way to save her people, Moana is also also completely filled with self-doubt. Still, she pushes on, figuring out her next move as she goes and that adaptability is what helps make her character so likable.

As a musical, the songs and score here are impressive, rich, and engaging. From meaningful solos to catchy upbeat numbers, the soundtrack runs the gamut of emotions. Sure, for a Disney picture it’s not very hard for that to happen but there’s something distinctly special about the music in MOANA. And that’s what makes exploring all the bonus features here so exciting. A lot of new ground was broken (or should we say new islands explored?) to bring this picture to life and all the behind the scenes material are a fascinating dive into bringing it all together.

The bonus release includes a wealth of goodies that will keep fans occupied for hours. Here’s a recap of the goodies per Disney.

MOANA is available now on Blu-ray, DVD, and Digital. 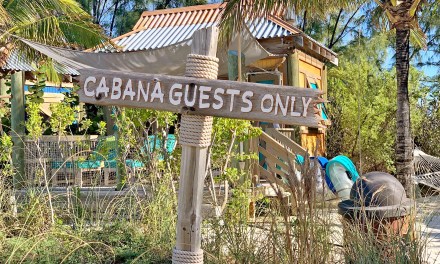 DETAILS: Castaway Cay Cabanas when you sail on the Disney Cruise Line are a luxe vacation upgrade