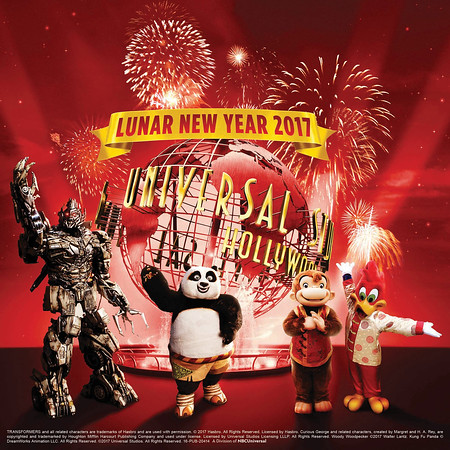 Universal Studios Hollywood has confirmed their Lunar New Year plans and the will be welcoming  DreamWorks Animation’s KUNG FU PANDA stars, Po and Tigress as part of the festivities.

Also returning this year are Mandarin-speaking MEGATRON as well as Curious George and Woody Woodpecker who will be dressed in festive Chinese attire.

For the “Year of the Rooster,” the Lunar New Year celebration comes to life within Universal Plaza, situated at the heart of the theme park where guests will be ushered into the polygon-shaped piazza, under a curtain of customary red Chinese lanterns and a stunning plum blossom arch.

Guests will find a dozen lampposts, each featuring banners of the twelve zodiac animal signs along with three symbolic attributes. A selection of Asian-inspired treats will also be available, including pastries decorated with the Chinese characters for “Rooster” and “Fortune.”

6 MUST-SEE treats for the holidays at UNIVERSAL STUDIOS HOLLYWOOD