The popular Halloween Time season continues to pack in the crowds and this weekend was no exception. Masses of guests poured into the parks as the typical late summer heat beats down on the Resort.

On this trip, we noticed that even though we’re still more than two weeks away from Halloween, Disney is already getting ready for the massively popular Christmas (aka the Disney Holidays) season. New merchandise has already hit the shelves (and yes it’s all as adorable and must-have-able as you can imagine it is) plus lights are starting to go up on the facade of “it’s a small world” in anticipation of its yearly Holiday makeover.

Over in Mickey’s Toon Town, the beautification project continues as walls go down and even more walls go up all around the tiny land. Right next door, the Star Wars themed land is a flurry of activity as more foundations are unearthed, new concrete is poured, more rocks are fashioned and a general plethora of bric-a-brac. Other refurbishments continue on at New Orleans Square train station and others still wrap up such as Peter Pan’s Flight.

Over at Disney California Adventure, we find the the new MOANA sneak peek has moved into the Bug’s Life Theater and brought with it Moana merchandise in the shops. Over in Hollywood Land, Mad T Party is almost a complete distant memory with the final vertical sights removed while some walls remain for final touchups before restoring the area into a quiet corner of the park. Plus, Tower of Terror continues to fade into the Twilight Zone as scaffolding and tarps now cover a majority of the attraction’s facade.

We’ll take a peek at progress in Downtown Disney’s upcoming SPRINKLES cupcake location and we’ll take another merch run for all the new purchasables to drain your wallets.

All of this and more in our newest pictorial! ENJOY!

Disneyland is already showing signs of the upcoming Christmas season with the “it’s a small world” exterior getting ready for its Holiday layover.

The strings of lights–or at least the strings sans lights, so far–are already dotting the facade.

There’s no lights in most of them… yet.

Holiday merchandise is also already starting to show up in the shops.

So, basically I need one of everything here.

Gravy Boat Bambi, slightly creepy but must have. And… owl is… a sugar dish?

Fancy a spot of tree–err–tea?

THIS PATTERN IS EVERYTHING.

Don’t care how, I want it now!

Some lovely baubbles for your fortune card tree. 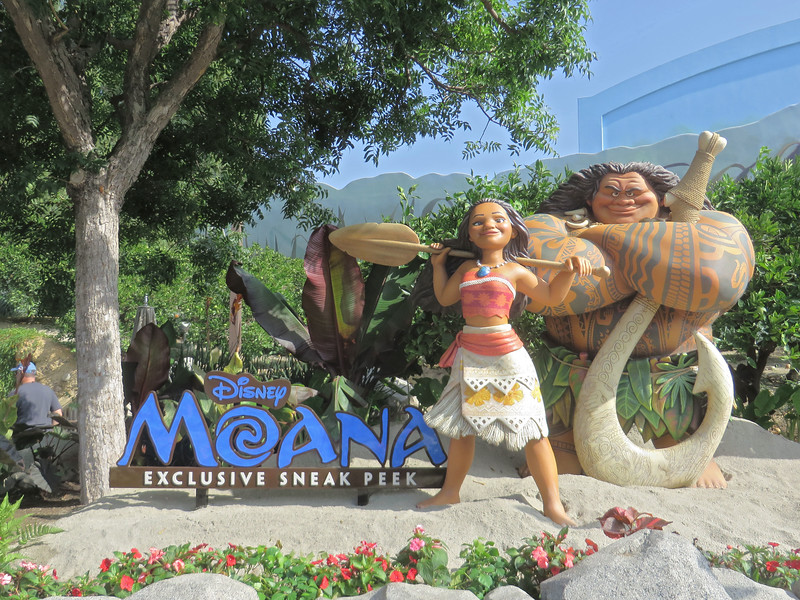 MOANA has come ashore at Disney California Adventure in the Bug’s Life Theater. The new preview utilizes several of the theater’s built in special effects to take us into the adventures of Disney Animation’s newest feature.

Just a week after the debut of the sneak peek, there’s now a selection of merch for Marvel’s upcoming DOCTOR STRANGE.

Still a flurry of activity.

More dangers added! Harpoons! What exactly is living in those waters??

Starboard delivery for the Twain.

Closer look at the out-houses.

Now you know how they get the water green.

Reminds me of the 1952 classic “The Little House”.

We noticed a few weeks ago the turnstiles were removed from the Haunted Mansion, now they’re gone at the entrance for the Enchanted Tiki Room.

No Critter Country for you.

Miss Daisy is freed from refurbishment.

Seems like a great spot to meet Donald. No queue space though.

You may call me Your Highness.

Tower of Terror is almost completely covered at the front. I hope they replace the tarps with a large photograph of the Tower like they do on Main Street.

Only one showing of FROZEN – Live at the Hyperion today.

The show will be dropping its FastPass requirement except on peak days. So it will be standby just like the Aladdin show before it. Are you glad?

World of Disney still under wraps.

This was grabbing attention.

Hold on to yer hats and glasses!

Are you a ROGUE ONE?