For the first time in… well–a couple of weeks actually–FROZEN will find itself in a new stage show! This time, the popular animated feature will be brought to life exclusively aboard the Disney Wonder ship of the Disney Cruise Line in the new “Frozen, a Musical Spectacular.”

The new adaptation promises innovative combination of traditional theatrical techniques, modern technology and classic Disney whimsy. The 977-seat Walt Disney Theatre provides the perfect setting to immerse audiences in the kingdom of Arendelle and showcase the renowned score. Songs like “For the First Time in Forever” and “Love is an Open Door” will be expanded into ensemble pieces, and the film’s wintry wizardry will be realized in lavish production numbers of “In Summer” and “Fixer Upper.”

A stand-out moment, the emblematic ballad “Let it Go” will be transformed into a full-fledged stage spectacle. Complete with real-life magic – transformative scenery, snow flurries and state-of-the-art video technology – this show stopping number will bring Elsa’s enchanted icy blasts to reality like never before. 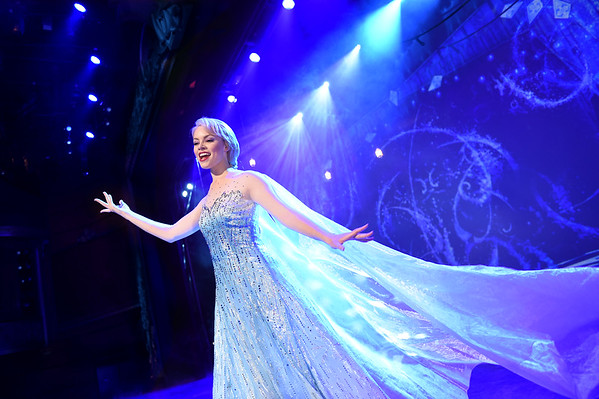 The show will also feature music direction by Marco Paguia, projection design by Aaron Rhyne and lighting design by Rui Rita in addition to puppetry created by Michael Curry whose designs are featured in Disney’s Tony Award-winning Broadway musical “The Lion King.”

A similar version of this show debuted recently at Disney California Adventure. An entirely separate two-act Broadway production of “Frozen” is currently being prepared by Disney Theatrical Productions and is slated to join Disney Theatrical’s New York productions of “Aladdin” and “The Lion King” for spring 2018 at a theater to be announced. It will have a pre-Broadway engagement starting in summer 2017 in Denver.