There’s not usually a lot going on in the summer as Disney tries to optimize the experience for the busy vacation season but as we know the Disneyland Resort in general is a hotbed of activity this year.

Star Wars themed land construction continues to go vertical while Tom Sawyer Island continues to undergo refurbishment with new paint. Some of that new paint was recently unveiled at the old mill at the southern end of the island used as the backdrop for Fantasmic!. The building now sports a brighter paint job of red and green which many are starting to piece together is likely to enhance projection mapping effects on a revamped version of the show.

Meanwhile, in Fantasyland the Bibbidi Bobbidi Boutique has expanded its empire by creating a new auxiliary room offering expanded areas for guests to wait and sign up for their magical transformations for boys and (mostly) girls.

The summer heat got us thirsty so we hopped the monorail and went to the new Downtown Disney Starbucks for a visit. The tiny new shop now serves as a closer option to Disneyland Hotel guests for the double-tailed mermaid’s famous coffee. A selection of snacks, food, and souvenirs are available inside.

Plus, we take another look at merchandise available all around the resort with a special emphasis on Disney Fan wedding gift ideas.

The area known for now as “Star Wars Land” is quickly becoming Star Walls land as construction continues to go up all around the construction site. Interesting vistas across the Resort.

There’s a new paint job on the old mill on Tom Sawyer Island and many online noted how much brighter the scheme is than its previous dull brown. The reason for this is not coincidental. With Disney’s recent announcement of the 2017 return of Fantasmic!, it should come as no surprise that the preparations are for a rejuvenation of the popular nighttime spectacular. The brighter building creates a better canvas for projection mapping. All around the island, refurbishments continue to move along. Tarps are down around some areas and previously grey primed rocks are now sporting more natural spotting and aging textures. Walls have gotten taller at the Sailing Ship Columbia, blocking views at enhancements being made to the ship.

The little flex space near Pinocchio’s Daring Journey has found itself in use once again, this time as the Royal Reception. Used as as an auxiliary room to handle the crushing demand for Disney’s Bibbidi Bobbidi Boutique, you can pay for and book your appointments and also get a buzzer that will let you know when it’s your time to be transformed. There’s a small selection of costumes and accessories on display and handouts offering a look at all the options available.

The second Starbucks has been open at Downtown Disney for a while now and offers a closer caffeine respite for guests of the Disneyland Hotel. The shop offers a sizable selection of munchies and also promotes the Starbucks K-cups as brewable in the hotel’s own coffee makers. Starbucks in your room! The shop also offers a selection of several different California themed cups that are normally only available in those respective cities. Options include San Francisco, San Diego, Los Angeles, and Las Vegas.

No indication of progress at the former giant Quiksilver location.

Looks like they’re settling in for a swinging wake!

Still wish this was artwork for a Haunted Mansion cartoon! Big Thunder Mountain Railroad was down so the trail was dead. Frontierland was a ghost town in the early morning hours.

Walls up around Mickey’s ToonTown Train Station. Water tower is getting some love, too. “While Everyone Sleeps” by NOAH.

Lovely teapots, a perfect wedding gift… except it’s all Walt Disney World on it. >,<

These would also make a great wedding gift for a Disney fan. Mad Tea Party Salt and Pepper shakers with matching display plate!

The Tangled set is also cute, they stack on each other to form the full tower. Only a few months left to get all your #Disneyland60 merchandise! Was 1987 the best year ever for cinema? Here’s a compelling list of reasons #SDCC 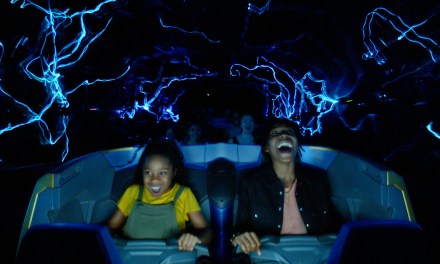 FUN FACTS: GUARDIANS OF THE GALAXY: COSMIC REWIND is a new kind of family thrill at EPCOT