Nemo takes a backseat in the latest Pixar Animation Studios release, FINDING DORY. Having settled into a routine at the reef, Dory (voiced again by the impossibly lovable Ellen DeGeneres) is happy with her newfound family. That is, until she starts to remember that she’s been separated from her parents. With her memory slowly coming back to her, she sets off across the Pacific to find them.

Audiences will flock to this feel-good return to form for Pixar, who bombed hard and fast with last fall’s abysmal (and incorrectly titled) THE GOOD DINOSAUR. I have a feeling this film could have made a billion dollars without being very good, but luckily for us, it is very good. Not quite TOY STORY 3 good, but still very good.

Thankfully, FINDING DORY doesn’t pull a LITTLE MERMAID II and just present a rehash of the first film’s story. Dory isn’t lost like Nemo was; Marlin doesn’t set off on a quest to find her. Writer and director Andrew Stanton (Finding Nemo, Wall-E) has concocted a charming story that never feels stale. Luckily for us, DeGeneres’ performance makes Dory so lovable, funny and sad that we can’t help but root for her to find where she belongs.

While much of the original film’s cast returns, either in substantial roles (Marlin and Nemo) or cameos (Crush and Squirt), the scene stealers turn out to be the newbies. Hank, an octopus missing one tentacle and voiced by Ed O’Neill (Modern Family), is the best addition of the bunch. Hilarious, neurotic and remarkably gifted at motor skills, Hank drives much of the film’s action once Dory arrives at the Marine Life Institute.

Diane Keaton (The First Wives Club) and Eugene Levy (Waiting for Guffman) appear as Dory’s worried parents. While they are of course charming and funny, their flashback scenes are heart-wrenching. Kaitlin Olson (It’s Always Sunny in Philadelphia) as a clumsy whale shark named Destiny and Ty Burrell (Modern Family) as a low-confidence beluga named Bailey are delightful as well.

The first act of the film moves a little slowly, but things really pick up and the laughs come fast and furious. Mixed in is the signature Pixar heart, and there are a few scenes that will no doubt bring parents to tears. And despite being very funny, the film’s climax requires a tremendous amount of suspension of disbelief – not that that wasn’t needed in the first place for a film about talking fish who seem to frequently cross the breadth of the Pacific Ocean.

Do stick around for the entire duration of the credits. They’re not only beautiful, but you’ll be rewarded with a treat at the end!

A new short, PIPER, plays before the film. I think PIPER is my new favorite Pixar short. Not only is it visually stunning, it’s almost uncomfortably adorable. It’s a perfect companion to DORY and is an instant frontrunner for next year’s animated short Oscar.

As always, the best place to see FINDING DORY is the El Capitan Theatre in Hollywood which has a special engagement going on to celebrate the film that includes a bubble extravaganza, exhibits and more. It’s also home to a perfect DolbyVision projection and Dolby Atmos sound, as well as an imaginative bubble show and aquarium exhibit, no other venue comes close. 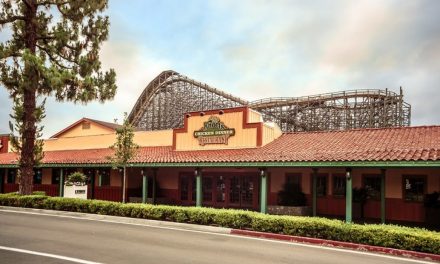