Part of the show floor for the D23 EXPO was dedicated to the big and small screens with Disney Studios, Disney Animation, Disney-Pixar Marvel, LucasFilm and ABC all represented with small pieces of real estate to promote their upcoming offerings.

We had a first look this past weekend at the displays for Alice Through the Looking Glass, Zootopia, and Star Wars: The Force Awakens and now we present a look at the rest of the displays including smaller setups for Moana, Marvel Films, ABC Studios, Pirates of the Caribbean: Dead Men Tell No Tales, and more. There’s also a quick tease for Disney Animation’s upcoming Gigantic and teaser posters for upcoming Coco and Incredibles 2. Disney teased the upcoming Moana and Gigantic films with small photo-ops. There was also a fun display for Zootopia which we chronicled last weekend.

Various people involved in various animated projects took to the Animation stage all weekend to talk about their process, inspirations, and methodologies for creating the masterpieces that come to life on the screen.

Live Action had a small setup as well promoting Alice Through the Looking Glass and Star Wars: The Force Awakens.

Pirates of the Caribbean: Dead Men Tell No Tale

A very minimal setup for the house of supers featuring Ant-Man’s suit and Hulk Buster’s gauntlet.

The same setup from Comic-Con made its way onto the D23 show floor offering a peek at the upcoming THE MUPPETS television show offering the chance for a photo booth photo-op. Check out an in depth look at the ABC Studios Soundstage from Comic-Con. 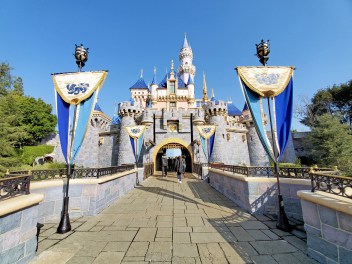 GUARDIANS OF THE GALAXY VOL. 2 land at El Capitan Theatre with special offers