We were invited today by Disney to visit the El Capitan Theatre for a look the limited time engagement of Disney’s TOMORROWLAND feature film. Although the box office for the film has been soft, it’s unquestionable that the amount of care and detail that went into the film was quite abundant.

All guests who visit the El Capitan Theatre to see TOMORROWLAND now through June 17, 2015 will have access to a fantastic behind-the-scenes exhibit featuring props and costumes from the film. But that’s not all, before every screening of the film, magician Greg Wilson presents an all-new magic show, “The Magic of Imagination.”

Wilson employs his regular dose of quirky humor going through some quick simple magic including a dazzling spectacle whereby he makes a giant TOMORROWLAND emblem appear live on stage and then just as quickly makes it completely vanish! Small World set pieces on display inside the theatre. A small selection of Tomorrowland toys are available inside the adjacent Studio Store.

“The Magic of Imagination” with Greg Wilson

This magic show is shorter than the previous one he did at the El Capitan for Oz The Great and Power. What’s interesting is that Wilson shared that his father–magician Mark Wilson–actually ran the “Hall of Magic” at the 1964 World’s Fair! This is a neat touch considering that the New York World’s Fair plays such a pivotal role in the film.

There’s two major pieces of magic used in the show. Wilson makes a cell phone (pulled from a member of the audience) disappear and re-appear in a different part of the theater! The big showpiece number is the appearing/disappearing act with giant replica of the Tomorrowland pin.

Behind the Scenes Exhibit

Various props and costume pieces are available on display. It was a neat experience to get a close-up look at the costumes from the film. You can appreciate details that even in HD that you don’t realize or notice on screen. From the tiny stitching to the details of the fabrics used, you can really appreciate the craftsmanship of the costumes made for the film. There’s also some really great notable prop pieces from the film including character Frank’s homemade jetpack. Tickets: www.elcapitantickets.com, or by calling 1-800-DISNEY6.

After the movie we were craving a bite to eat and discovered that the POKINOMETRY location was open! There’s one in Anaheim not too far from Disneyland so we were already familiar with the Poke in a Bowl concept. It’s basically a build-your-own sushi in a bowl and it’s fantastic!

If you’re in the area and love Poke/Sushi then give Pokinometry a shot It’s on the third floor and actually has a view of the El Capitan from the adjacent dining area! Not only that but there’s a great view of downtown, too, if the day is clear enough!

There’s more coming to the El Capitan Theatre, check out what else will be coming soon! 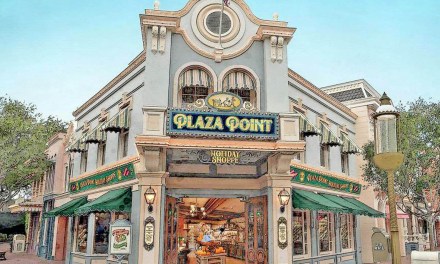