D23 the Official Fan Club of Disney has announced some of its events for 2015. The fan club will be bringing back some of its fan favorites like advanced screenings of new films, FANNIVERSARY events, Lunch with a Disney Legend, and of course the D23 Expo later this year.

What’s coming from D23 this year:

There’s bound to be more to enjoy throughout the year too so keep an eye here for all the latest D23 announcements! To become a member of the official Disney fan club, visit disney.com/d23.

BURBANK, Calif. – February 9, 2015 – In 2015, D23: The Official Disney Fan Club will bring back many of its beloved events while adding a selection of new experiences for members.

CINDERELLA LIGHTS UP THE PALACE OF FINE ARTS: On March 12 members will be treated to a screening of Walt Disney Studios’ upcoming release Cinderella, followed by a reception exclusively for D23 Gold Members. The event will take place following The Walt Disney Company 2015 Annual Meeting of Shareholders at the Palace of Fine Arts in San Francisco. (Members do not need to be shareholders to attend the screening.)

SPECIAL SCREENING EVENTS ON THE DISNEY STUDIO LOT: Starting this month, D23 kicked off another year of memorable screenings designed with fans in mind. On February 8, D23 screened 101 Dalmatians, which included the premieres of two new short films; a panel featuring Disney Legend and animator Floyd Norman, Lisa Davis (voice of Anita), and Mimi Gibson (Lucky); a special gift and more. Other experiences on the Studio lot in 2015 will include The Parent Trap and a special 75th anniversary celebration of Pinocchio, as well as a screening of the “Peoples and Places” featurette Disneyland, U.S.A., with special guests in honor of Disneyland’s 60th anniversary.

D23’S LUNCH WITH A DISNEY LEGEND: Back by popular demand, in 2015, D23 will continue these intimate gatherings with Disney Legends this spring and fall. In 2014, D23 Members joined such Legends as Marty Sklar, Floyd Norman, and Bill Farmer for private luncheons on The Walt Disney Studios lot.

D23 MEMBER VIP STUDIO TOURS: A new event for 2015, D23 will offer this unique experience only to D23 Gold Members. It will include a tour of the Studio during a working day on the lot, along with a special lunch with a Disney Legend and a unique VIP gift. Each limited-capacity experience will include new tour stops and unique moments sure to bring smiles to Disney fans. Events will be held on May 29 with Walt Disney Archives founder Dave Smith and November 6 with a Legend to be announced soon.

LIGHT UP THE SEASON: An annual tradition exclusively for cast members and employees of The Walt Disney Company, Light Up the Season marks the official start of the holidays on the Studio lot. This year, D23 Members will enjoy their own special Light Up the Season event, complete with carols, cocoa, and a tree lighting.

D23 is also bringing more events to members across the country in 2015:

THE HUNCHBACK OF NOTRE DAME VIP EXPERIENCE: On March 15, D23 Members are invited to see the new theatrical production of The Hunchback of Notre Dame at the Paper Mill Playhouse in New Jersey. D23 Members save 20 percent on their tickets, receive a limited-edition pin, and will enjoy a post-show talk-back with the musical’s Academy Award®-winning lyricist Stephen Schwartz.

A TASTE OF DISNEY AT SILVERADO VINEYARDS: D23 Gold Members are invited to a day at Silverado Vineyards in Napa, Calif., the winery founded by Diane Disney Miller and her husband Ron. On March 13, guests will enjoy a lunch, tour, and wine tasting experience along with a special gift.

BREAKFAST ON BROADWAY: A select number of D23 Gold Members will enjoy private shopping at Disney Store Times Square on March 14 with a special discount; a continental breakfast at the New Amsterdam Theatre, home to the Broadway hit Aladdin; and a gift at this exclusive, complimentary event.

D23 MEMBER NIGHTS AT NEWSIES—ON TOUR: Disney fans are cheering for the Tony®-Award winning Newsies, now on tour. This year, D23 Members in San Francisco, Los Angeles, Dallas, Washington, D.C., Boston, and Toronto are invited to see the show, with premium seats on special nights and a talk-back with the cast following the show. (Some shows already sold out.)

DISNEY STORE MEMBER MIXERS: Since 2013, D23 has given members a peek at reimagined Disney Stores across the country—from Kansas and Nevada to Michigan and Texas. This year Disney Store will once again invite D23 Members for exclusive mornings of shopping, discounts, games, and goodies at new locations in Riverside, Calif., Lexington, Ky., Raleigh, N.C., Burlington, Mass., and many more.

ADVANCE SCREENINGS: In 2014, D23 Members were able to attend previews of Maleficent, Big Hero 6, and Into the Woods in cities such as New York, Orlando, Chicago, and Atlanta. This year, in partnership with Walt Disney Studios, D23 will screen a selection of upcoming releases.

FANNIVERSARY CELEBRATION—HOME EDITION: With D23 members spanning the country—and the globe—look for an exciting new twist this year on D23’s annual Fanniversary Celebration that all members will be able to participate in, no matter where they live.

D23 EXPO 2015: The biggest Disney event of all takes place August 14–16 at the Anaheim Convention Center when all the wonderful worlds of Disney come together for three magical days. From sneak peeks, concerts, and exhibitions to celebrities, Disney luminaries and more, there’s something for every Disney fan at the D23 Expo. Tickets are available now at D23Expo.com.

Dates, ticketing information, and more D23 events will be announced throughout the year, including new, member special events in Orlando. Full details on D23’s lineup of 2015 special events can be found at www.D23.com/events. All events and dates are subject to change.

About D23
The name “D23” pays homage to the exciting journey that began in 1923 when Walt Disney opened his fledgling studio in Hollywood. D23 is the first official club for fans in Disney’s 90-plus-year history. D23 gives its members a greater connection to the entire world of Disney by placing them in the middle of the magic through its quarterly publication, Disney twenty-three; a rich website at D23.com with members-only content; member-exclusive discounts; and special events for D23 Members throughout the year. 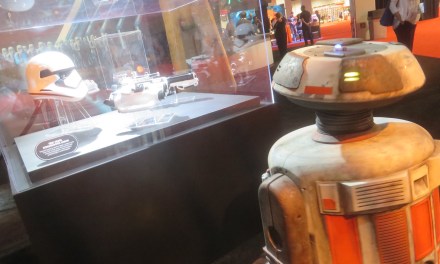 PICTORIAL: Haunted Mansion at 50 — A week of festivities and surprises for Disneyland’s ghostly abode