In an age where home entertainment systems are getting increasingly sophisticated and many are opting to stay home instead of going out, cineplex theater are left with the unenviable task of figuring out how to get people back in the seats. That’s where the folks at ScreenX come in.

ScreenX is a third party service that offers theaters the ability to give their customers a 270-degree “wrap-around” experience for select movies that are enabled with the service. We were invited to come check out a screening of CAPTAIN MARVEL at a local theatre. 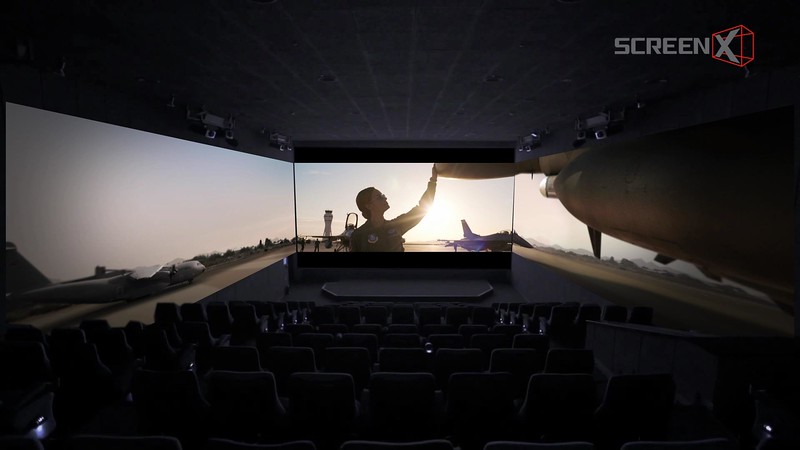 The screen is not curved. Instead, it’s a normal sized screen at the front and what you’ll notice walking into a ScreenX-equipped theater is that the walls are a flat surface. It’s on these walls that the 270-degree component comes in as several projectors mounted on the ceiling provide the extra bit of screen.

Seeing the ScreenX format with a movie like CAPTAIN MARVEL makes a lot of sense. Sweeping deserts, expanses of outer space, even hangars and space craft hallways get an instant enhancement with the “wrap-around” effect. It’s very theme park-like in the sensation of feeling literally like you’ve been placed INSIDE the movie. I’d already seen CAPTAIN MARVEL in standard format so seeing it again in this ScreenX format felt like an especially good basis of comparison. Honestly, I didn’t feel like the technology distracted from the movie. It enhanced dramatic fight scenes and seemed pretty cool.

The drawbacks? If you’re an HD snob, this experience will like you drive you a little bananas. The portions of the film shown on the side walls are not quite the same projection fidelity as the primary screen and at times seemed to be slightly distorted to better fill the space. Additionally, as you might expect, the entire movie is NOT shown in this format so the screens simply go dark; focusing your attention on the main screen. That perhaps might be a benefit, allowing you to focus in on moments that don’t necessarily need the gimmick. 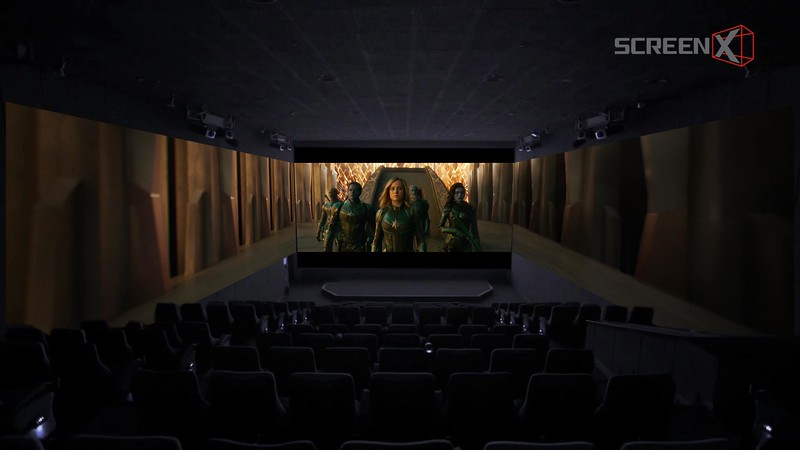 It’s hard to see that this format will be a wave of the future. Surely, the way to get the most out of the format is for a film to be created with this viewing experience in mind and that seems to be a lofty expectation. But at the same time, the beauty of ScreenX — as we saw with CAPTAIN MARVEL — is that you can really apply the experience to any film. If you’re a theme park junkie, you might half be expecting some 4D effects like wind, water, an scent which really starts to make the gimmick a little over-the-top. Additionally, like 3D, the format is not going to work on just any movie.

So is it worth seeing a movie in ScreenX? To be honest, I’d say yes. If you have the chance, I think it’s worth a shot. If you’ve already been willing to fork out a little extra for 3D glasses in the past, then you will probably find the few extra bucks for a ScreenX experience to be worth the while.

Interested in seeing a ScreenX movie yourself? You can visit their official site to find a theatre near you equipped with the technology. 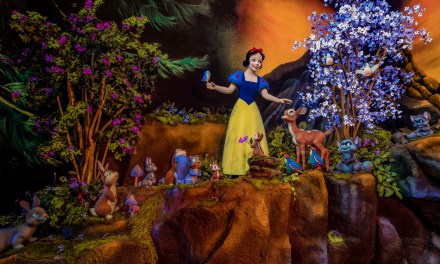