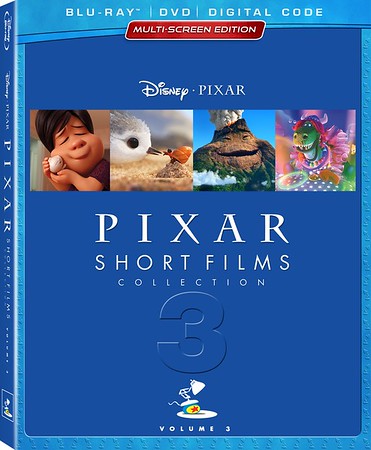 PIXAR SHORT FILMS COLLECTION: Volume 3 has been unleashed and it provides yet more ways to dive into the beautiful expansive universe of Pixar.

As with the previous two releases with Volume 1 and Volume 2, you might wonder what exactly is the purpose of bringing home this release if you already own the home-release of all the Pixar films and the answer is really simple: because you don’t have EVERYTHING in your existing collection.

In Volume 3, we get an expected assortment of previously released short films — eleven in total — everything from fan favorites like BAO and PIPER to other notable shorts like LAVA and (finally) THE BLUE UMBRELLA and there’s also some of the shorts that were released in other ways such as then-exclusive additions to the home-releases of films such as BRAVE’s LEGEND of MOR’DU or INSIDE OUT’s RILEY’S FIRST DATE.

But that still doesn’t answer the question of what new things you could expect to find. That’s where the bonus materials come in and for PIXAR SHORT FILMS COLLECTION: Volume 3 there’s a few:

PIXAR SHORT FILMS COLLECTION: Volume 3 is available now on Multi-Screen Edition (Blu-ray+DVD+Digital Code) and Digital. You can also find it as a bundle at select trailers with Volume 1 and 2 or with INCREDIBLES 2.