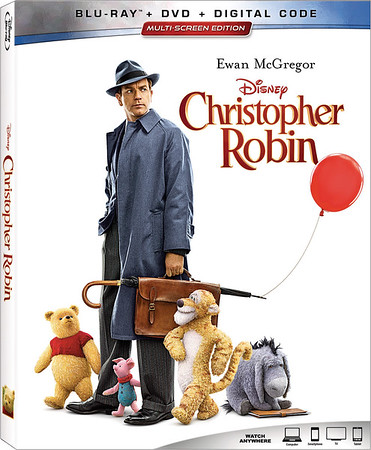 It’s always a sunny day when Christopher Robin comes to play and soon you can bring home a whole lot of sunshine with the home release of CHRISTOPHER ROBIN!

Bonus features provide a heartfelt look at the making of CHRISTOPHER ROBIN, showcasing the magical artistry that brings the classic characters to life, the human actors’ techniques for interacting with stuffed animals, and the filmmakers’ passion for their project. Bronte Carmichael, who plays Christopher Robin’s daughter Madeline, takes viewers on an exciting journey from the drawing board to film locations throughout the United Kingdom.

Features flash back to highlight Walt Disney’s fondness for Winnie the Pooh and recall the voice actors who lovingly portrayed the unforgettable voice of the iconic character. An exclusive digital bonus feature explores the actual teddy bear, given to Christopher Robin Milne 98 years ago, which inspired the original Pooh stories that have been shared and adored by families around the globe.

CHRISTOPHER ROBIN is available on Digital and Movies Anywhere and on Blu-ray™ and DVD with captivating on November 6, 2018.