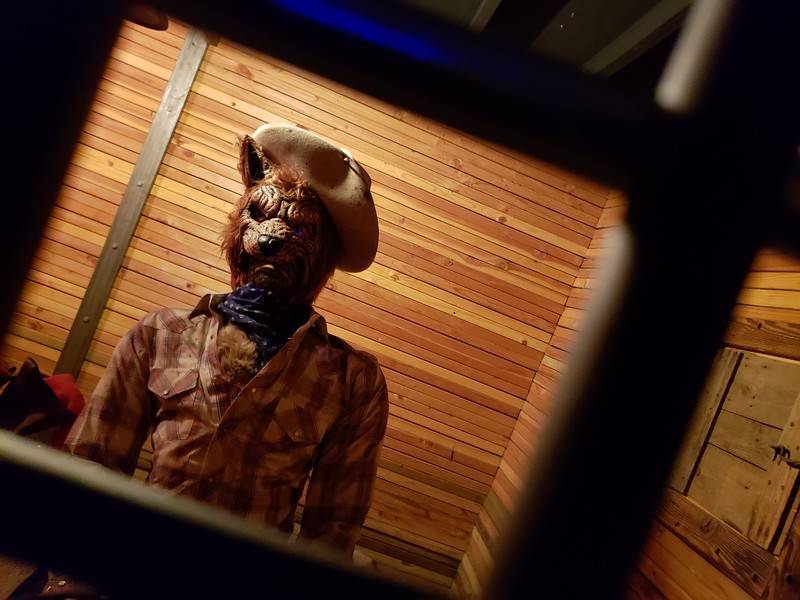 No one does Halloween like Knott’s Scary Farm, and that’s truer than ever in 2018. Back with a vengeance, the original theme park haunt event is jam-packed with monsters, mazes, and entertainment. On opening night we were invited to sample everything SoCal’s premier Halloween event entails, and we were thrilled with the results (and a little hoarse from screaming).

Let’s break down what you can expect from a night at Knott’s Scary Farm. ENJOY!

The core of the experience are the intricate and disorienting mazes the Knott’s team crafts each year. There are nine mazes (!) to experience this year, with two brand new ones joining a stellar lineup of returning favorites.

A demented trip through mining caves into unknown watery graves, THE DEPTHS features scares from undead miners, piranha monsters, menacing giant sharks, and a squid-faced ship captain that suspiciously recalls a certain Bill Nighy character from a certain Disney nautical film franchise. This maze is a blast, full of surprises like swaying ship decks, delightful water line effects thanks to lasers and fog, with genuine scares around every corner. We did this one twice! 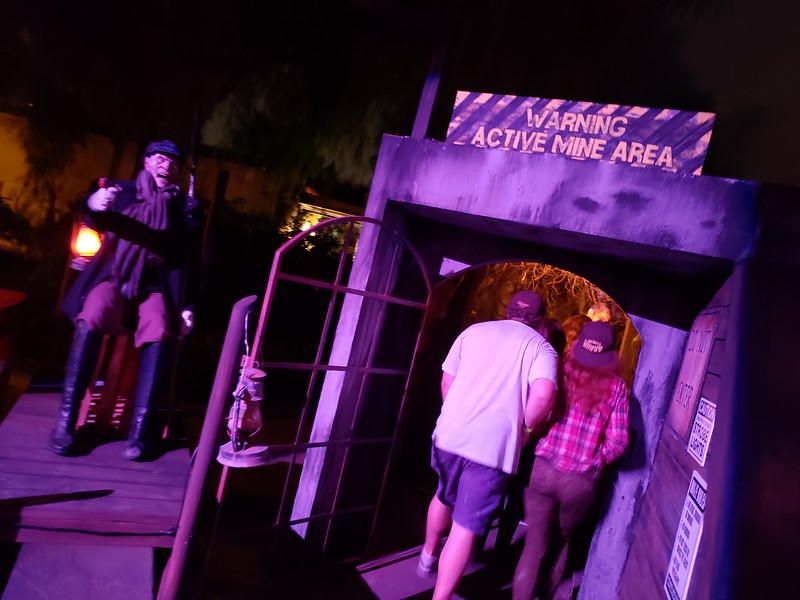 Situated behind PARANORMAL INC, this new maze features a space station invaded by a THE THING-like virus. It’s gory, it’s a bit cheesy, and while we enjoyed ourselves, the concept could use some polishing. The purposeful wink to 50s-60s sci-fi styles is fun but also removes some of the creepiness from the proceedings.

This returning favorite is sporting a brand new ending that is disorienting precisely because of how normal it is! The opening show scene with the flying ghost girl is still a blast, and the maze itself still provides plenty of scares even if some parts have started to feel familiar. Our own “fearless” leader Joey got scared out of his mind in this one, and if that’s not a solid recommendation, I don’t know what is! 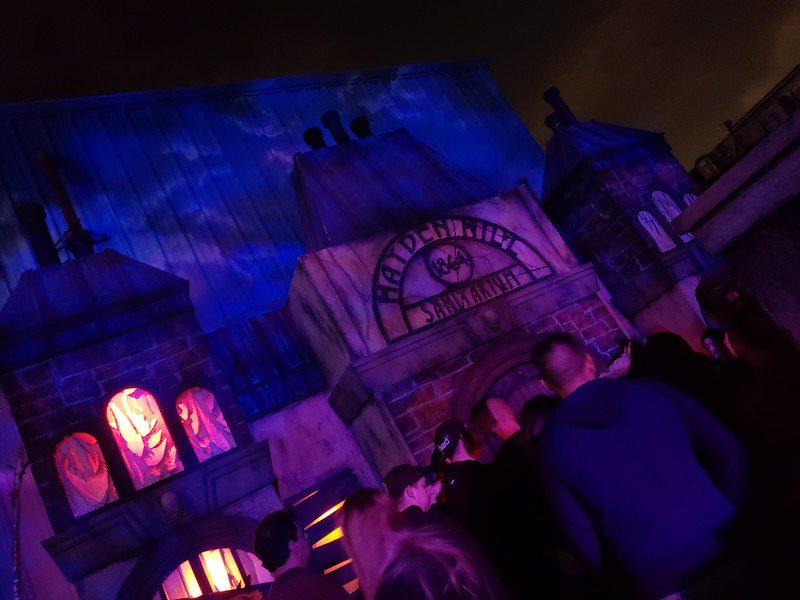 TRICK OR TREAT: LIGHTS OUT!

Perhaps last year we caught this one at an off time, because it didn’t stand out, but wow – what a creepfest! The maze is in almost total darkness and you have nothing but an unreliable flashlight to help you through. We screamed A LOT in this one. The monsters did an awesome job of hiding and the darkness makes it feel like a legitimate horror movie. Plus, we stan the Green Witch, so any opportunity to visit her is a big plus.

New in 2017, DARK RIDE was an instant hit. It’s still a fantastic maze that lovingly sends up amusement park tropes, down to the “ride track” inlaid in the floor. Some of the night’s creepiest moments came from the demented carnies in this maze; it’s definitely not for the faint of heart! A must-see this year, as always.

Another returning favorite, SHADOWLANDS features delightfully creepy representations of Japanese lore. Disfigured monster geishas, vicious samurai, and even living shrubbery (it’s scarier than it sounds) make this one a delight to travel through. The opening show scene was skipped for 2018, and the maze is stronger for it.

This maze tries, it really does, and it was actually improved this year, but it’s still just…not good. The concept quickly becomes just an endless series of dummies in meat grinders and while some of the actors were genuinely creepworthy, it doesn’t congeal into a cohesive experience. We’re hoping a new maze takes its place next year.

While not big on scares, SPECIAL OPS: INFECTED lets you do something no other maze does: fight back! You get a “gun” and the excellent zombies react to your shots as you try to stave off a viral infection in a city sewer. The cast is fantastic, the concept is fun, and there’s some great set design along the way.

This is a kitschy favorite of ours. I mean who doesn’t want to push aside giant pumpkin seeds as you try to escape from a giant, cursed pumpkin? The imagery is top notch and of course, over the top – that giant bug animatronic is a bit much – but the end result is a really fun maze. We were happy to see this one back again this year.

There are few places in Knott’s Scary Farm where monsters don’t roam free, so don’t expect much by way of safety. There are four main zones, and we’ll start with the biggest, baddest of them all!

The lake under Silver Bullet is home to the most stylish scare zone Knott’s has ever attempted, FORSAKEN LAKE. The monsters here look AMAZING. Exquisite makeup and costuming. In fact, I was in such awe of how great they looked I often forgot to be scared! Keep an eye out for creeptastic funeral processions in this area throughout the evening.

The sprawling city of Ghost Town is home to hundreds of roving monsters in fog so thick you can often barely see a few feet in front of you. Walking through can feel a bit like a gauntlet, and that’s part of the fun! You can even have dinner in the fog at Ghost Town Grill, which I can’t say we were brave enough to try. This is the original scare zone, and it’s still the best! 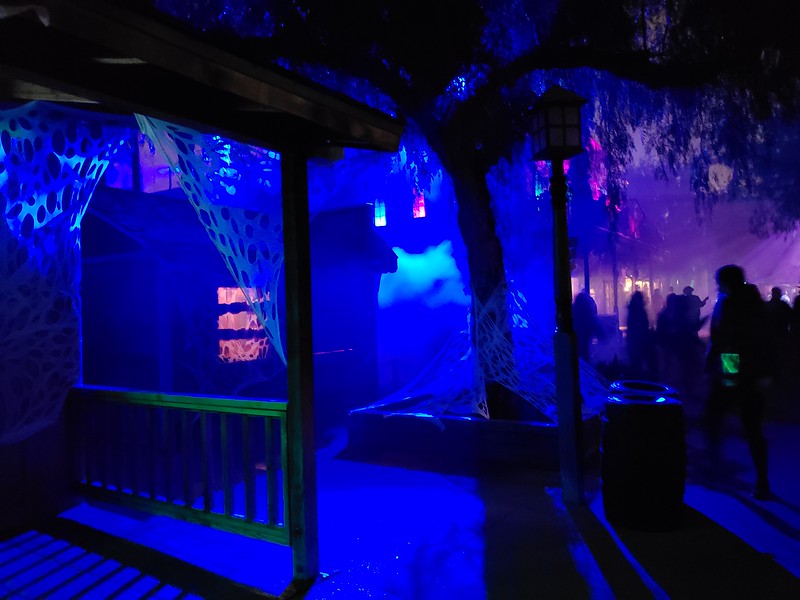 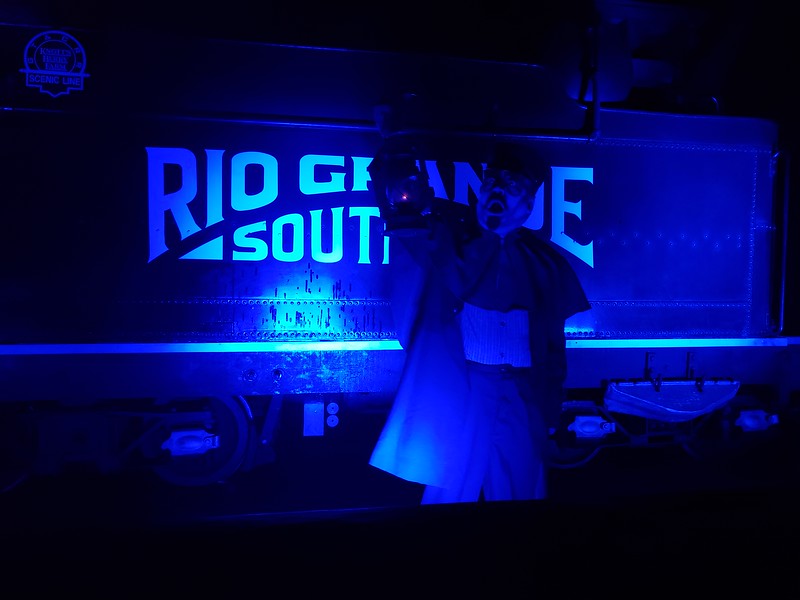 The Boardwalk area of the park is inhabited by a bunch of insane clowns, many of whom carry chainsaws. We found that looking straight ahead and pretending to not notice them did NOT WORK.

Camp Snoopy, a haven for kiddies by day, is downright terrifying at night with a Sleepy Hollow-inspired scare zone featuring headless monsters, Revolutionary War-era ghosts, and some terrifying things that kind of defy description. This was a strong scare zone last year and we were happy to see it back again.

Every year pop culture figures are skewered, with the worst offender hanged in the Calico Square. We won’t spoil who gets the noose this year, but there were several worthy candidates. The show is brash, politically incorrect, and definitely not safe for kids (but if you brought kids to Scary Farm, what’s wrong with you anyway?). The hard working cast is funny and nails several fun stunts. Worth a watch if you happen to be nearby during a show time.

Entertainment can be found around every corner during the event. Surprise performances occur on the saloon balcony at random intervals throughout the night. The Charles Schulz Theater hosts HACKS!, an improv comedy show where the audience helps the actors construct a horror movie. In the Birdcage Theater, a rotating cast of professional illusionists are the sleeper hit of the event with the new show, CONJURERS. 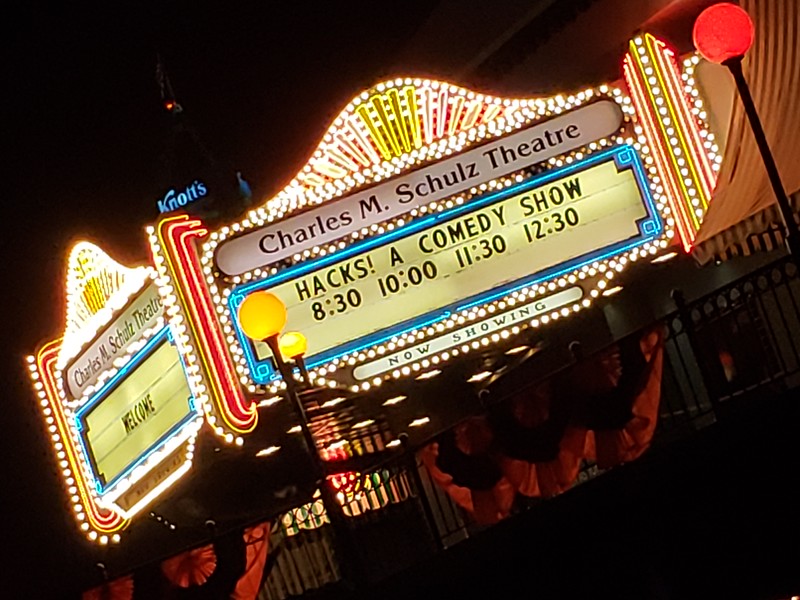 The famous log ride gets a completely absurd and absolutely awesome layover with various Halloween themes throughout its show scenes. Aliens, giant spiders, werewolves, big foot? Sure. All is fair game here and its pretty great although most of the additions are blink-and-miss there’s a few notables here including the green witch on the final lift hill. This is a fun one if you’re willing to brave the water.

Around the park, there’s a bunch of themed eats to help keep you fueled in-between screams. Mango Milk Tea with a Lychee Eyeball might catch your eye but there’s a bunch of other tantalizing treats including spicy chicken sandwich, chocolate funnel cake, goblin grub snack cone, and tons of different desserts themed to various creepies and crawlies. 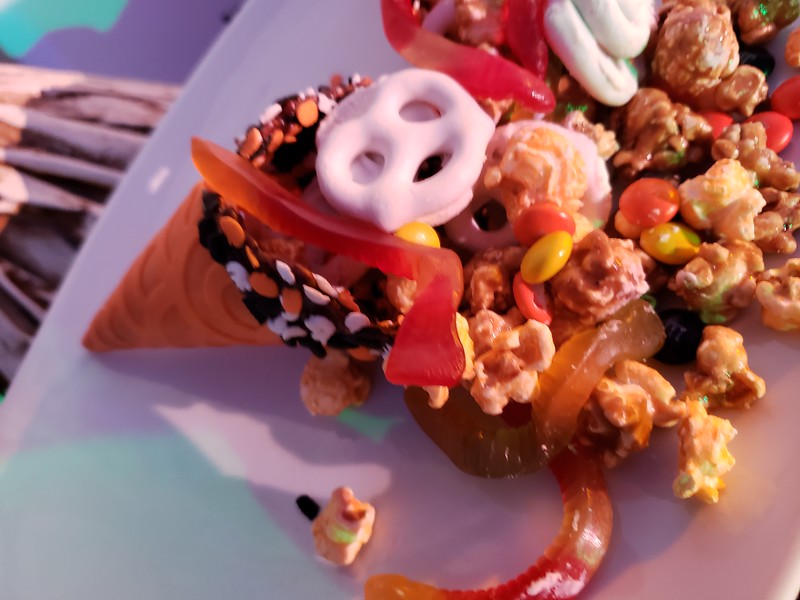 Knott’s Scary Farm is consistently the most popular Halloween event in Southern California – everyone wants a piece of the action. On opening night, some mazes were showing wait times of two hours or longer for most of the evening. There are a few ways to make sure you’re able to get more scares than the masses on the night of your visit. Regular event tickets are available at knotts.com for $42-$58 per person, so be sure to buy online as prices start at $82 if you wait to buy at the gate.

You gotta eat anyway, and for $31.99 you can have an all-you-can-eat dinner at world-famous Mrs. Knott’s Chicken Dinner Restaurant, followed by early entry access to four of the park’s most popular mazes (TRICK OR TREAT: LIGHTS OUT!, THE DEPTHS, DARK ENTITIES and PARANORMAL INC). Getting early no-line access to TRICK OR TREAT and PARANORMAL INC in particular can save you hours during the event, so this is well worth the price tag. Show up early so you can chow down and have time to enjoy early entry before the crowds descend.

For a VIP experience, FRIGHT LANE provides unlimited front of line access to every maze, plus all of the park’s regular thrill rides, including the new Hangtime coaster. Depending on the night you visit, a combo event ticket and Fright Lane access will cost $120 – $149 per person. Prices are higher at the gate, so be sure to buy online in advance.

If you just can’t get enough haunting, $99 gets you unlimited access to Scary Farm for every night of the 2018 event. Online ticket prices range from $42 – $58, so this pays for itself in just two nights of Scary Farm. Plus it gives you more time to make sure you experience every maze, scare, and show the event has to offer. 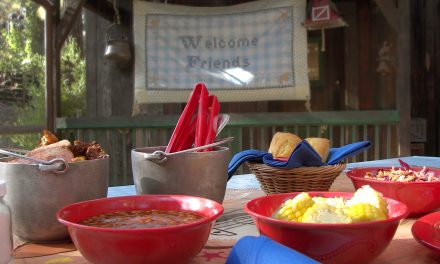