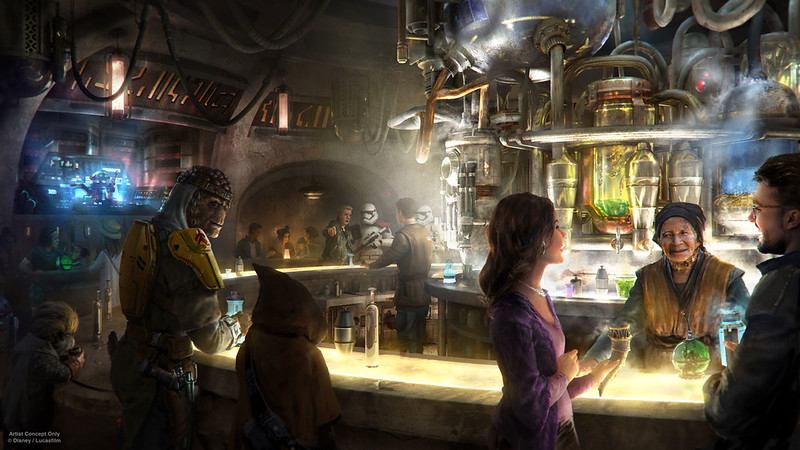 Little by little, Disney has been teasing details for the upcoming Star Wars: Galaxy’s Edge expansion which is concurrently under construction at both Disneyland Park in California and Disney’s Hollywood Studios park in Florida and today we learned that the new cantina in the land will be serving “libations for adults.”

Currently, for a “spirited” drink, Disneyland park goers must either exit the park to visit one of the Disney Hotels, Downtown Disney, or Disney California Adventure park. Alternatively, members of Disney’s exclusive Club 33 can also find themselves a sip of adult libations in their exclusive lounge and restaurant. Private events (such as Disney weddings) at Disneyland often also serve alcohol in-park, as well.

Run by an intriguing alien proprietor, Oga Garra, the cantina adheres to a strict code of conduct that tries to keep its unruly patrons in check. But with a history of being a smugglers’ safe haven and a popular stopping point for those seeking to avoid the authorities, you can bet that the cantina has a story or two to tell. Oga’s Cantina is the kind of establishment that attracts some of the most interesting and disreputable characters in the galaxy. And you never know when a stormtrooper or a familiar face will show up.

Musical entertainment is provided courtesy of RX-24, the former StarSpeeder 3000 pilot droid we first met in Star Tours, who has re-envisioned himself as the cantina’s DJ. As quirky and talkative as ever, he’s still trying to do his best on the job.

Oga’s Cantina opens its doors at Star Wars: Galaxy’s Edge in 2019 at both Disneyland Resort and Walt Disney World Resort.