Fans came together under the roof of the El Capitan Theatre to celebrate and sing their hearts out with the Disney majesty, THE LION KING.

Despite everyone in attendance having probably seeing the instant classic a thousand times, we all cried during Mufasa’s expected, always-devastating death. But that was probably the only sad part about the evening! But that’s because there’s a lot to be happy about from this movie. Whether it’s the epic opening “Circle of Life” or the infectious “Hakuna Matata” it’s a celebration through and through.

And the fun starts before you ever enter the theatre! You can show that Hakuna-Matata-Smile and show your friends who the real king of Pride Rock is! Yeah, everyone has seenit plenty of times (or should have), but YOU saw it at the classic El Capitan Theatre!

Lion King merchandise? Yes, please. My account had less money coming out than going in, but it was WORTH IT. Drink coffee in style, add a plush to your bedroom, or collect your 100th Disney POP! figure. Of course I had to get the Simba figure. I’ll leave him in the box though so I won’t mess up his mane. There’s one thing missing though. Where is Mufasa! Let me say it again, Mu-FASA! Ohh it tingles me.

For once in my life, I could sing without being judged of how I sounded. To me, I’m always the Beyoncé in Destiny’s Child, but not to my friends. For one evening everyone had one goal, and that was to ensure everyone heard us on Hollywood’s Walk of Fame. Old, young, it doesn’t matter. When you’re watching THE LION KING, there are no rules.

You can also bring home the magic and majesty of this film later this month when THE LION KING on Walt Disney Signature Collection roars onto Digital on August 15, 2017 and on Blu-ray and DVD on August 29, 2017. 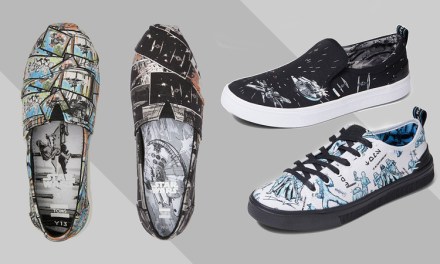 The Force is strong with the new #StarWarsxTOMS collaboration