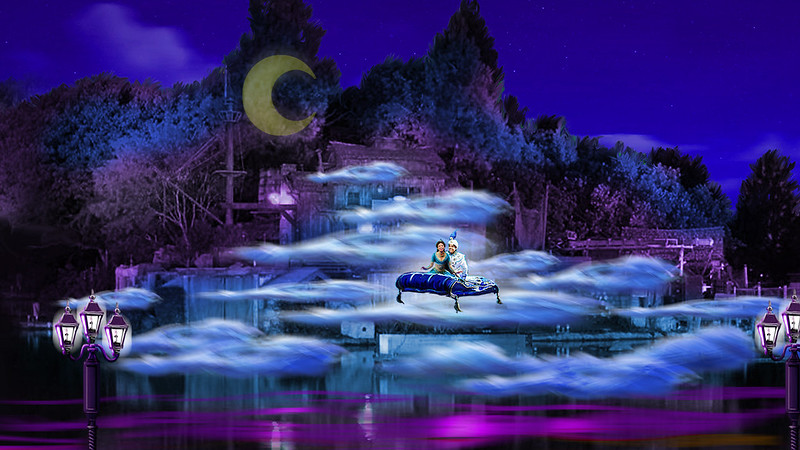 Disney has been pretty coy about just how many changes are coming to the cherished Fantasmic! show when it returns later this summer but they recently released some concept art that gives a peek at one new addition featuring Aladdin and Jasmine floating over a bed of fog on their flying carpet during “A Whole New World.”

Upon its return, Fantasmic! will feature even more new magic including new mist screens that will combine with innovative, state-of-the-art projection technology for brighter and more vibrant visuals than ever before.

Disney has also confirmed that the show will maintain it’s original fanfare and theme song. Other changes hinted at officially include Mickey Mouse in more scenes than ever before and new roles for Genie from “Aladdin,” “Rapunzel,” “The Lion King” and “Pirates of the Caribbean.” Rumors abound for changes to the show including Rapunzel replacing Snow White in the iconic princess segment and Jack Sparrow and crew replacing Peter Pan aboard the Sailing Ship Columbia.

The big SUMMER OF HEROES marketing push launches on May 27, 2017 and lasts through September 10, 2017. The campaign will celebrate the opening of Guardians of the Galaxy – Mission: BREAKOUT and include dance parties, character meet and greets, and more.

The return of Fantasmic! is just a small taste of changes coming to the Disneyland Resort this summer. There’s also the upcoming SUMMER OF HEROES campaign which will launch new, year-round experiences:

Fantasmic! is expected to return “later this year.”