9 secrets we learned from the cast of GUARDIANS OF THE GALAXY VOL. 2

The principal cast of GUARDIANS OF THE GALAXY VOL. 2 joined director James Gunn and Marvel creative honcho Kevin Feige to discuss the film with the press a couple weeks ago. We were there to pick up some of the juicy behind-the-scenes tidbits they shared! It’s hard to pick the truth from the sarcasm, but we think you’ll be up to the task.

Saldana would arrive at the set for makeup as early as 2:30am each morning to prepare for the day of shooting, with 4 hours in the makeup chair. She intimated that she’s always talking and that’s how she passed the time. “It can take a long time. I just, I talk my team to death. I’ve been saying this, I don’t, I don’t shut up, from 2:30 in the morning until we’re on set and James says “Action,” I just keep talking and I feel like that’s how I get time to go by, because if not, I’ll just go crazy.” Karen Gillan, who plays villainous Nebula, and Pom Klementieff, who plays Mantis, spent an equal amount of time in the makeup chair each day.

Sean Gunn gets screen time as Yondu’s right hand man Kraglin, but it turns out he pulls double duty. Instead of playing to an imaginary Rocket Raccoon, Gunn would “fold himself down” and play Rocket in every scene to give the other actors something to play off of, as well as a template for Rocket’s animators and voice actor, Bradley Cooper.

When asked how many films he had signed on for, Stallone responded tongue-in-cheek: “I’ll believe it when I see it, Kevin [Feige]. This is Hollywood. You know what I mean?” Stallone stated that he’s been catching up on Marvel comic books and when asked why, he paused and deadpanned to the crowd. “Because I’m an optimist.”

Director James Gunn coaxed it out of the soft-spoken former wrestler while working on the first film. “I was laughing and he said, ‘Can you do it louder?’ and the louder I started laughing, the louder I could hear him laughing. So he just was doing it to amuse himself and the bigger it got the louder he laughed, so I just kept going bigger and bigger until I lost my voice.”

When asked about joining the cast, Disney Legend Kurt Russell said “They do this weird thing. I didn’t quite know what to make of it. And it’s so weird. You have to do this thing, you have to go to Chris’s house.” Pratt shut him up quickly. He might have been joking, but would anyone put a Guardians hazing ritual past Chris Pratt? But also please invite us next time.

The moderator for the event, Kara Warner, asked if the longer than normal shirtless scene was “at someone’s request.” Rooker, who plays Yondu, piped up immediately. “That was my request, wasn’t it?” Gunn continued joking, saying that Kevin Feige requires shirtless scenes, a “beefcake clause.”

Russell apparently asks questions constantly, so much so that Gunn said being on set with him was like “wrestling a playful circus bear.” Russell said his long time partner Goldie Hawn has stolen that and uses it all the time. Gunn went on to say that working with Rooker was like “tazing a badger.”

One journalist asked Pratt about male objectification, and Pratt had lots to say. “So I can say objectification is good for me because when I turned my body into an object that people like, I got paid a lot of money. And now my grandkids are gonna go to a great college because of the object, you know. But you have to be a little sensitive about that because there are also really great roles, there are a lot more great roles probably, classically written for men than there have been for women.”

Rooker was savage about working with Pratt. “I think, it’s not too hard to keep a straight face, especially when you’re having a scene with Chris Pratt. He’s not very funny. You know, he’s adorable and all this stuff, and he does say some interesting things every now and then, but you know, he’s so high-brow compared to my comedy.” 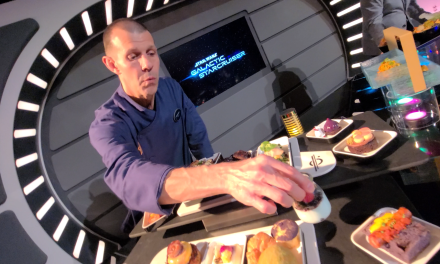 SWGS: Feast your eyes on sumptuous food and drinks from #StarWars #GalacticStarcruiser