UNIVERSAL STUDIOS HOLLYWOOD continues to break its own records heading into 2016. Its biggest year ever is just getting started with the imminent opening of THE WIZARDING WORLD OF HARRY POTTER on April 7. With a growing number of mainland Chinese guests visiting the park while in Los Angeles, Universal has stepped up their Lunar New Year offerings with a two week long celebration through February 14, 2016.

Filling Universal Plaza with gorgeous flowers and decor, the tribute to Year of the Monkey includes meet-n-greets with Curious George in traditional Chinese attire and Megatron from TRANSFORMERS, speaking Mandarin Chinese in a living character performance. Guests can write down their wishes and place them on wishing trees throughout the plaza, as well as partake in special Asian-inspired gourmet food offerings. For one day only on February 13, The Five Continents Art Troupe will perform an exciting traditional Shenzhen show in Universal Plaza.

Chinese visitors are accommodated year-round on the park’s world famous Studio Tram Tour, which offers trams throughout each operating day in English, Spanish and Mandarin Chinese. The park even has a dedicated website for Chinese visitors at ush.cn. Take a look at the beautiful celebration, plus a quick update on the Hogsmeade’s progress!

Curious George is the cutest ever!

Curious George had his own wish for the wishing tree – bananas!

Megatron only addresses guests in Mandarin at Universal Plaza Hogsmeade is awfully close to Springfield! 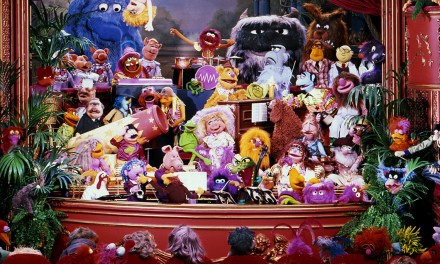 THE MUPPET SHOW is bringing all five seasons on Feb. 19, 2021 to #DisneyPlus