As part of the upcoming ALADDIN DIAMOND EDITION release, the beloved classic is coming to the iconic El Capitan Theatre in Hollywood.

If you been to the El Capitan before you know you get more than just a movie and before the film starts for this engagement, guests will be able to see Genie live on stage! Plus, on select dates, guests may enjoy breakfast, meet Genie and receive a photo before seeing the 10 a.m. screening!

ALADDIN will be running at the El Capitan Theatre from September 17 – October 7, 2015. ALADDIN DIAMOND EDITION is available on Blu-ray and Digital from October 13th.

The Magical Disney Classic “Aladdin” Returns to the El Capitan Theatre, Hollywood for a Limited Run September 17 through October 7, 2015

HOLLYWOOD, Calif. (Friday, August 11, 2015) – In celebration of the in-home Diamond Edition release of “Aladdin,” Hollywood’s legendary El Capitan Theatre is thrilled to present a limited run of the magical Disney classic Sept. 17- Oct. 7, 2015. Before the movie, El Capitan guests will be greeted by Genie, live on stage.  The El Capitan will also host a special opening-night screening on Thursday, September 17 at 7 p.m.

“We couldn’t be more excited for ‘Aladdin’ to return to the El Capitan,” said James Wood, operations and stage production for The El Capitan Theatre. “The El Capitan is the perfect place to revisit this animated Disney masterpiece, filled with unforgettable songs and extraordinary characters, or experience it for the very first time.”

On select dates, El Capitan guests may enjoy breakfast, meet Genie and receive a commemorative photo before seeing the 10 a.m. movie. Seating is limited and reservations are required.

The El Capitan Theatre will also host a very special Tiny Tot Tuesday every Tuesday during the run of “Aladdin” at  10 a.m. During these special screenings, parents and small children may enjoy the movie in a tot-friendly way—with lights dimmed rather than out and reduced sound levels.  Following every Tiny Tot Tuesday screening, Genie will return to the stage for pictures.

ABOUT “ALADDIN”
In the heart of an enchanted city, a commoner named Aladdin and his mischievous monkey, Abu, battle to save the free-spirited Princess Jasmine. Aladdin’s whole life changes with one rub of a magic lamp as a fun-loving, shape-shifting Genie appears and grants him three wishes, setting him on an incredible journey of discovery. Through his adventures, Aladdin proves that he is a prince where it truly matters most — on the inside!

With the help of a hysterically funny, shape-shifting, 10,000-year-old Genie, street-smart commoner Aladdin and clever, confident Princess Jasmine join forces against the evil sorcerer Jafar to put an end to his plans to take over the kingdom. 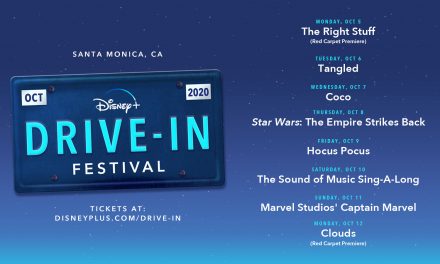