The first official teaser trailer for Disney-PIXAR’S THE GOOD DINOSAUR has just been released! Without revealing a whole lot, the new video showcases the premise for the whole film which is… WHAT IF? What if the dinosaurs were never wiped out on earth? How would dinosaurs and humans have co-mingled?

The striking visuals are quite a departure from what we’re used to from Pixar in a feature-length flim. The characters here are quite stylized, perhaps the most they’ve ever been in a feature film from the house of Lamp.

THE GOOD DINOSAUR stomps into theaters on November 25, 2015.

ABOUT
Peter Sohn made his directorial debut with the Pixar short film “Partly Cloudy.” He has worked in the art, story and animation departments, and also has voiced the characters of Emile from Academy Award®-winning “Ratatouille” and Scott “Squishy” Squibbles from “Monsters University.”

Denise Ream produced the Golden Globe-nominated film “Cars 2” for Pixar Animation Studios, and served as associate producer for Disney•Pixar’s Academy Award®-winning film “Up.” She also has an extensive background in producing visual effects and animation for live action films. 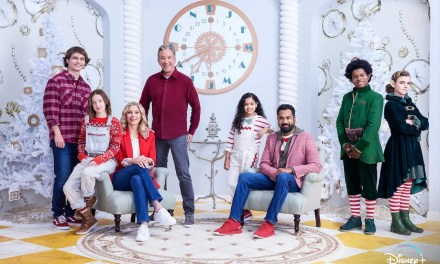