Universal Studios Hollywood has announced a June 25th opening date for the newest attraction FAST AND FURIOUS: SUPERCHARGED. They also released a behind-the-scenes look at the attraction and how it was made.

Spanning nearly 400 feet in length to encircle Studio Tour guests within a newly constructed 65,000-square-foot structure on the legendary backlot, the sprawling custom-built screen will employ 34, 4K projectors and a sophisticated projection configuration system to envelop guests in unprecedented realism.

The captivating 90-second behind-the-scenes footage offers insightful perspective on the making of this adrenaline-charged attraction along with interviews with several of the Fast & Furious franchise cast members and stars of the ride, including Dwayne Johnson, Michelle Rodriguez and Tyrese Gibson.

The first-look footage can be accessed here and debuts nationally on NBC during the special telecast of “Fast Five” on Saturday, March 21, at 8:00 p.m. ET / P

“Fast & Furious—Supercharged” is a technologically advanced, epic ride that reunites stars from the Fast & Furious series in a groundbreaking mega-attraction, conceived as a new installment to the Fast & Furious films that can only be experienced at The Entertainment Capital of L.A. Featuring Vin Diesel (Dominic “Dom” Toretto), Dwayne Johnson (Luke Hobbs), Michelle Rodriguez (Letty Ortiz), Tyrese Gibson (Roman Pearce) and Luke Evans (Owen Shaw), “Fast & Furious—Supercharged” will catapult guests into the high-stakes underground world of fast cars in a harrowing escapade—at perceived speeds in excess of 120 miles per hour—to save one of their own from an international crime cartel

Sharing their enthusiasm for “Fast & Furious—Supercharged,” cast members had this to say during their on-set interviews for the behind-the-scenes shoot “I get a chance to become Luke Hobbs and kick-ass…all in 3D,” said Dwayne Johnson.

“It’s really a sensory driven experience, and I can’t wait to see what happens,” commented Michelle Rodriguez. Tyrese Gibson added, “Everything about Universal Studios puts you in the driver’s seat to really experience Hollywood.”

Coupled with an intense blend of thrilling visceral effects, “Fast & Furious—Supercharged” will take guests on a wild ride that begins the moment they board the Studio Tour. Exclusive interstitial content—that was filmed with the cast members—will be featured on the tram monitors—highlighting interactions as they engage guests en route to the ride’s climatic scenes. Along the tram route and featured on the ride, sightings of numerous prop cars from the Fast & Furious series, including Dom’s iconic Dodge Charger, will enhance the story. 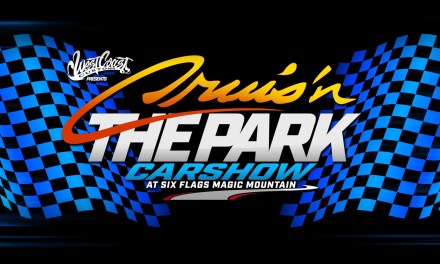