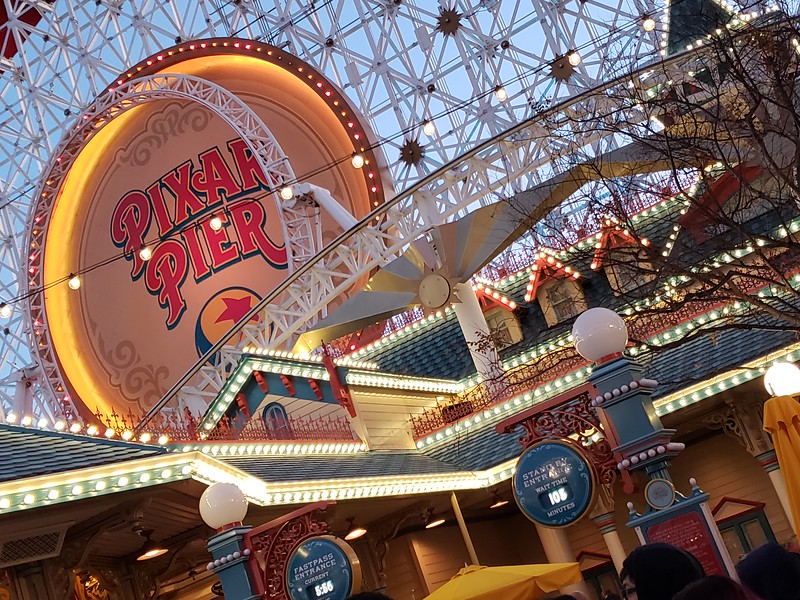 Plunging temperatures did not little to make crowd levels lower this weekend at the Disneyland Resort but even still there remains a bunch of on-going projects at the Happiest Place on Earth. Take a look as we venture into Disney California Adventure for a look at the newly returned World of Color, work on Pixar Pier, Jessie’s Critter Carousel, Inside Out: Emotional Whirlwind, and the Marvel-themed land. Plus a peek at Star Wars: Galaxy’s Edge, the new parking structure, and a nice merch run at the end. All of this and more in our latest park pictorial. ENJOY!

We were at Disney California Adventure Friday night to catch the highly-anticipated return of WORLD OF COLOR. The show that we all know and love is back and just as bright as before! There’s not any noticeable changes to the show or its format, at least not that we could tell from our seats at the Lamplight Lounge. From very start to the point that last orange fountain does a final bow, the whole experience still times out at nearly 30 minutes.

Critters have finally started to appear on the Critter Carousel.

A new mural lines the back wall of the carousel. 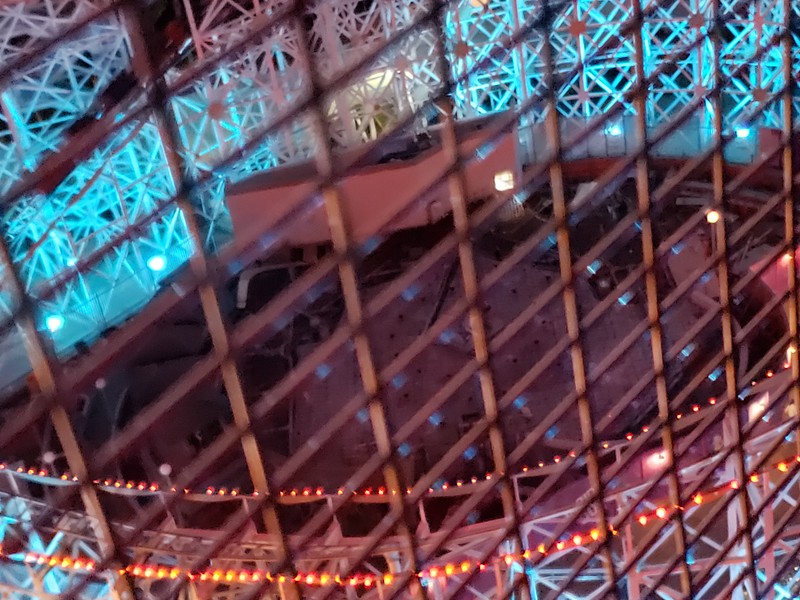 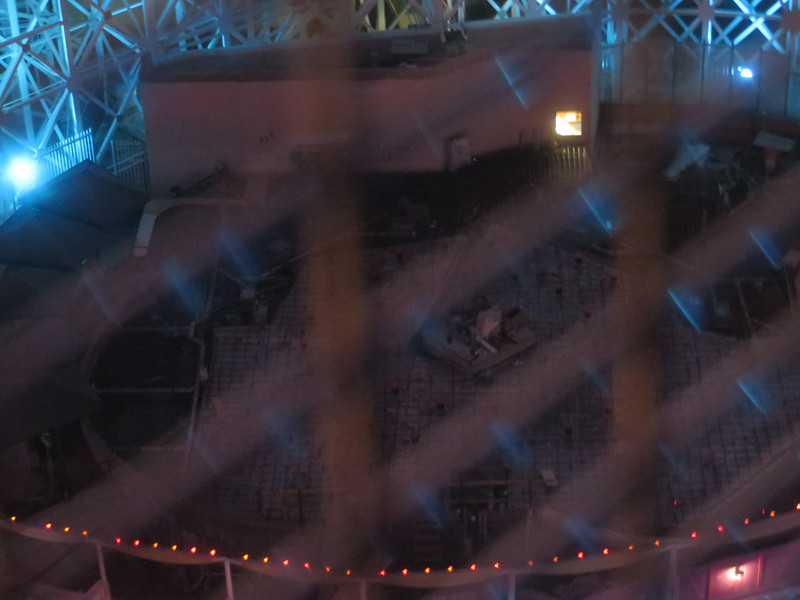 So dark to the point of not even being worth while but INSIDE OUT: EMOTIONAL WHIRLWIND has new concrete, footings, and other progress moving readily along.

There’s a sight we haven’t seen in a while! 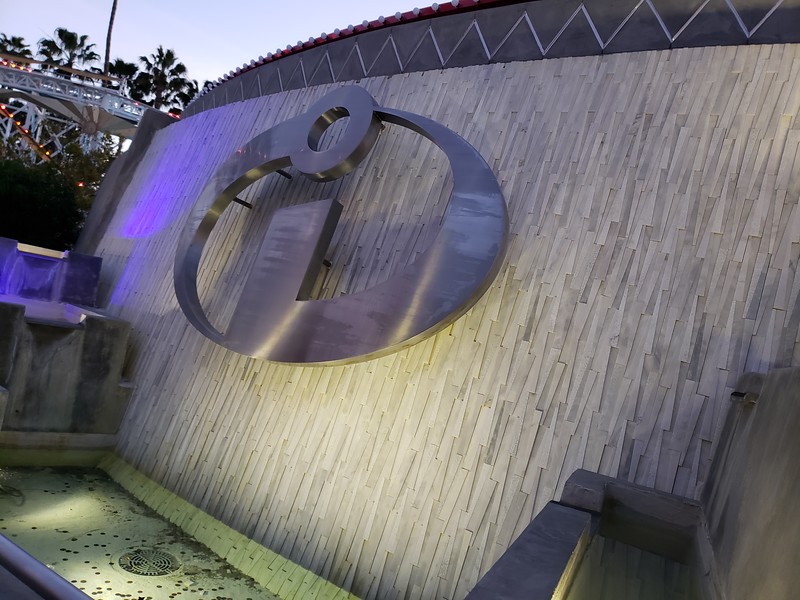 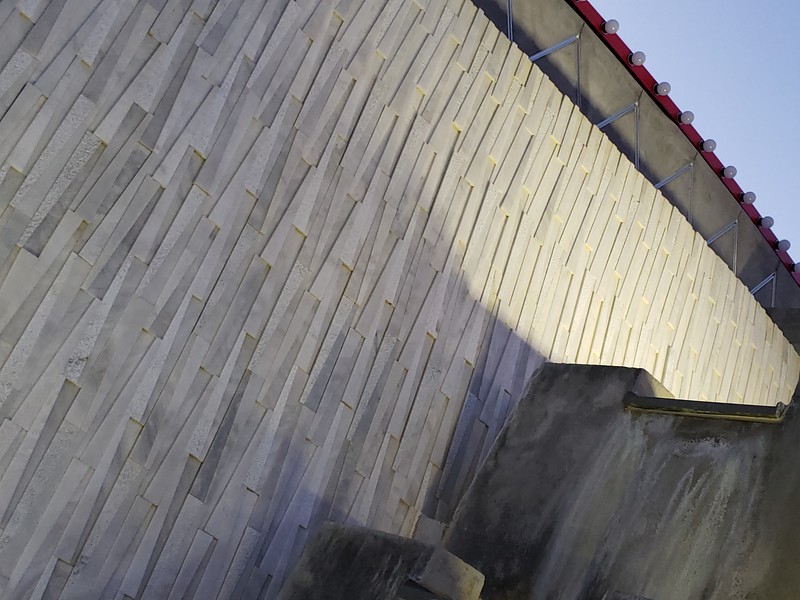 Yellowing seems to have been mostly addressed on the fountain.

Not sure when it happened but it seems the upstairs portion of the Lamplight Lounge has reverted back to feeding guests back in through the back of the restaurant as it was when it operated as the Cove Bar. When the restaurant reopened last year, both upstairs and downstairs sections were fed in through the main entrance of the location creating two confusing sets of lines feeding into the same entrance but going to different places.

The fact that there’s still a single name also seems confusing. While it seems intuitive that upstairs and downstairs are separate dining experiences it seems on face value still distinctly confusing. It seems perhaps the solution could just be as simple as a minor adjustment to the location’s name: Lamplight Lougne and Restaurant. The name establishes two separate ideas that you can then relay more clearly, the full restaurant is downstairs, the limited-menu lounge is upstairs.

They also should bring back a marquee making the Lounge entrance more clear.

You can still get the color-changing Potion Purple cocktail at the Lamplight Lounge.

They are still serving the Purple Potion cocktail at the Lamplight Lounge.

Our two favorite upstairs dishes at the Lamplight Lounge remain the Lobster Nachos and the Crispy Piggy Wings (sauce on the side!) 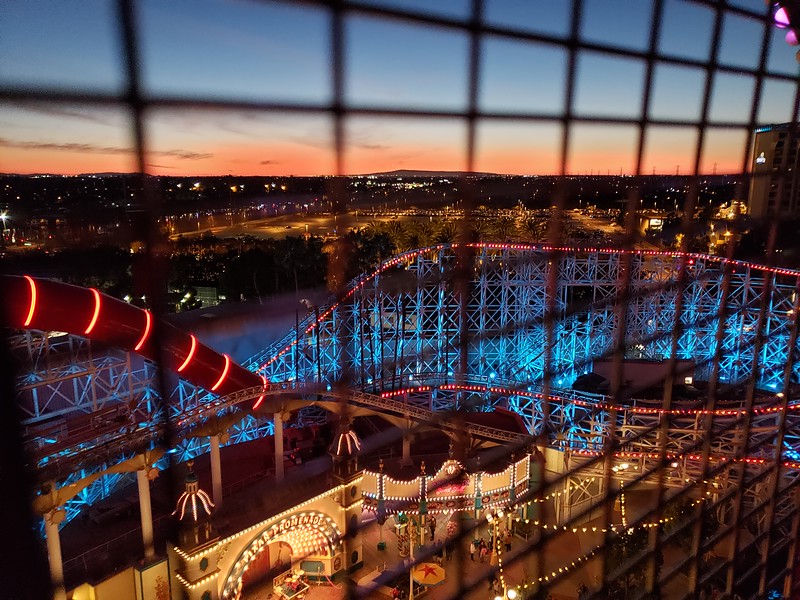 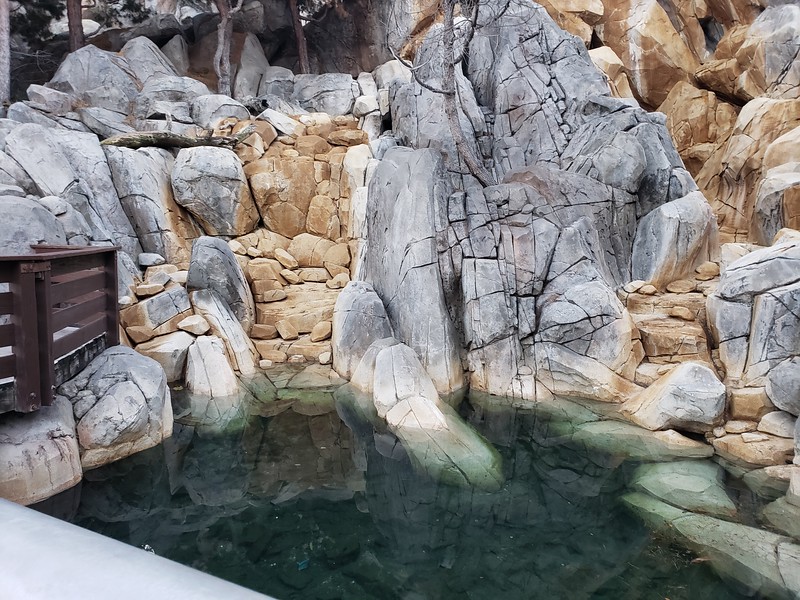 Grizzly River Run and its water features are still down for refurbishment.

Demolition continues on the bug’s life theatre in preparation for the upcoming Spider-Man attraction and Marvel-themed land.

The public won’t get their chance to explore Galaxy’s Edge until June when the new land opens at Disneyland (and then again later in the year a clone of the land opens in Walt Disney World) but Marvel is ready to take you to the planet of Batuu — and specifically the Black Spire. 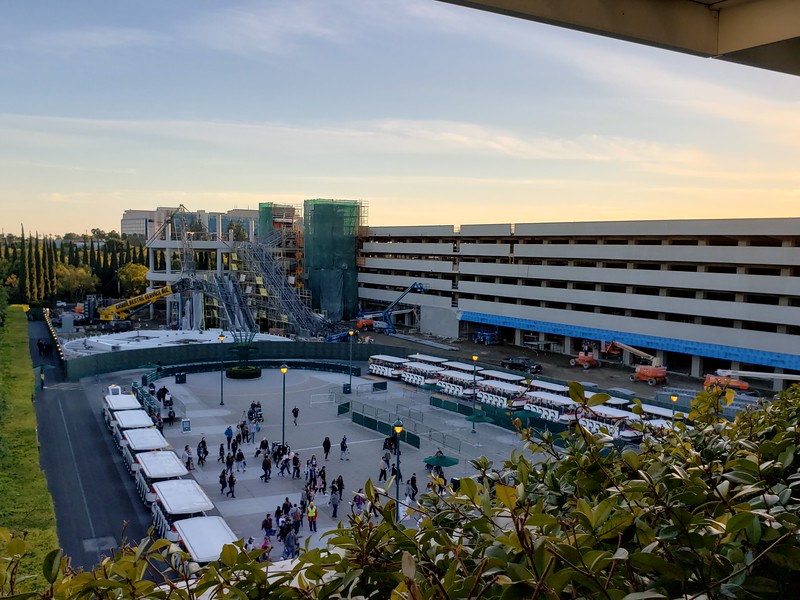 The new parking structure next to Mickey and Friends is very quickly coming along, seemingly ready to open ahead of the expected June opening for the new Star Wars: Galaxy’s Edge expansion.

Escalators are coming along.

Looks like the roof piece that they’re assembling on the ground is getting ready to soon be lifted over the rotunda. 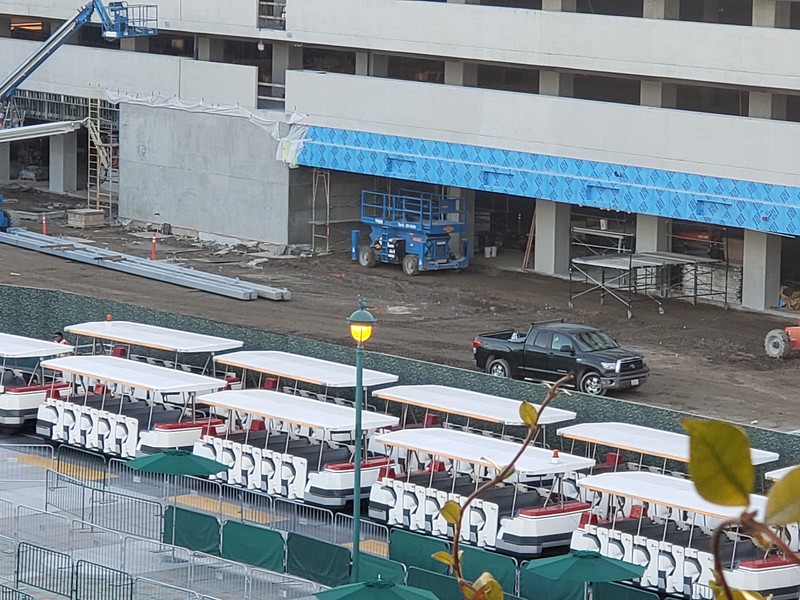 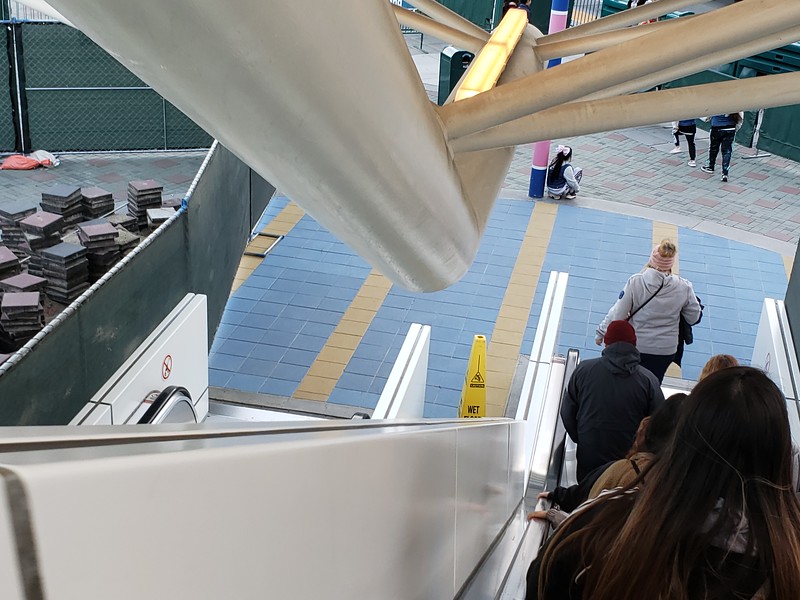 New pavers line the base of the escalators at Mickey and Friends Parking Structure. 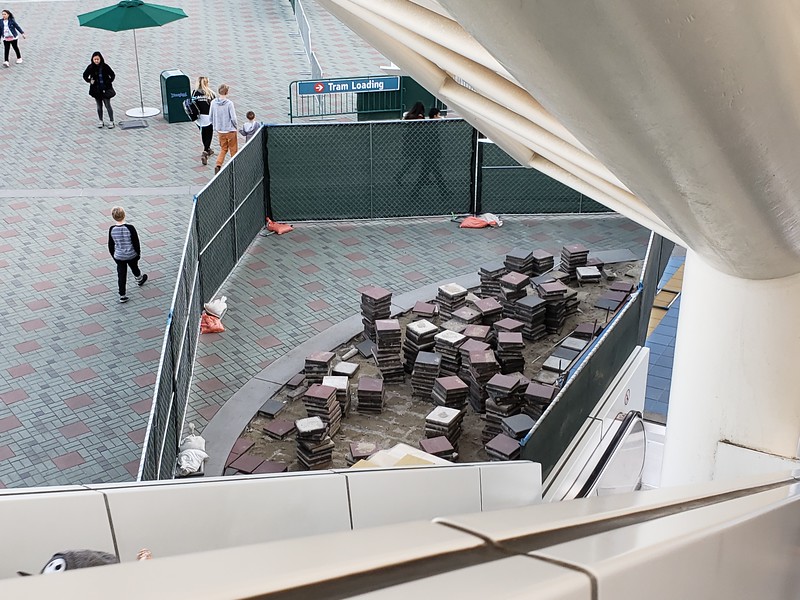 Mickey and Minnie can be pulled out of their Easter egg shells.

There’s a similar Shamrock Mickey that can be removed to showcase a cute little outfit underneath. 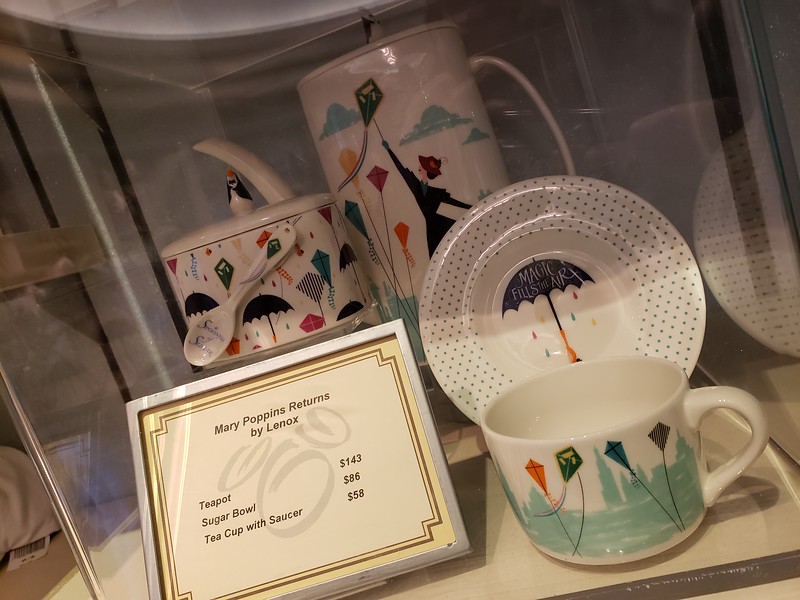 Lenox. Shouldn’t this be Royal Doulton? 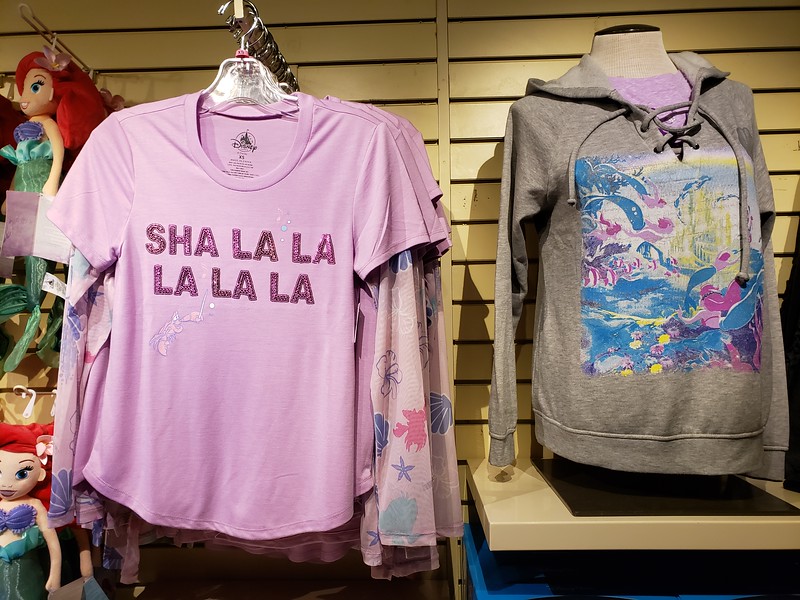 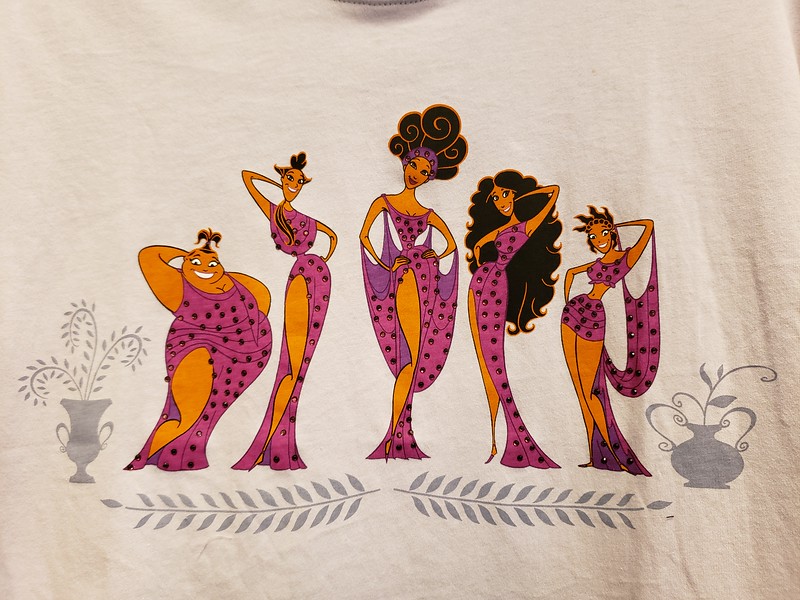 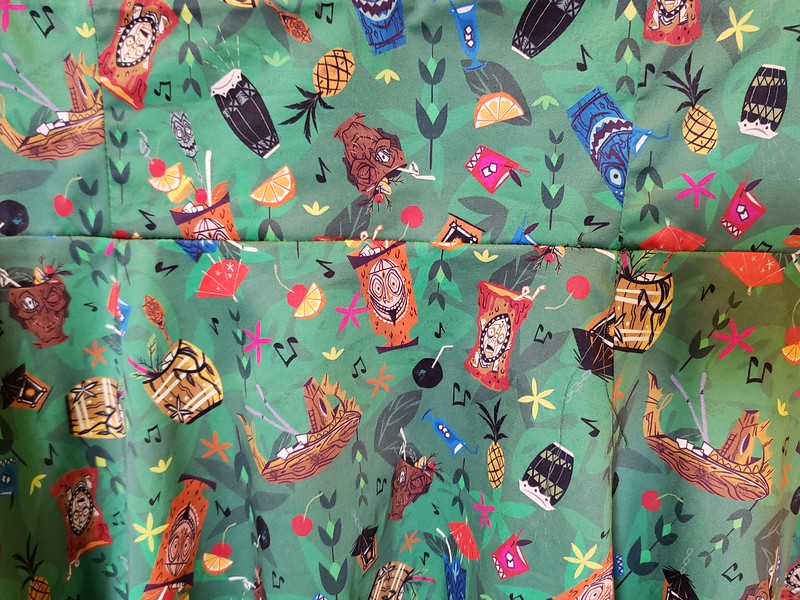 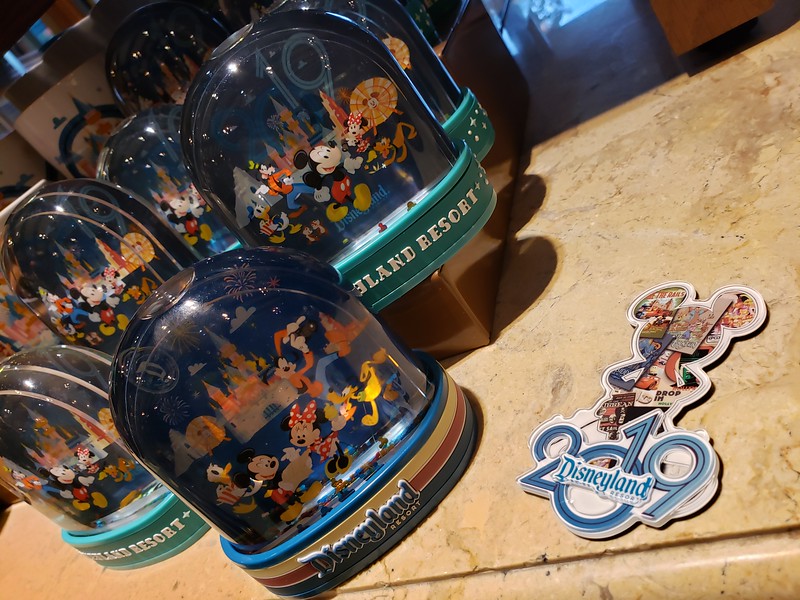 With rain remaining on the horizon you might find yourself seeing Mickey’s Rainy Day Cavalcade. When inclement weather forces cancellation of the parade at Disneyland, they run this simpler Plan B option which features a bunch of characters are loaded up onto Main Street vehicles and they head on down the parade route!

If you’re looking for more personal face-time with the characters and you LOVE brunch, you’re in luck as Disney’s PCH Grill is bringing a brunch option to Donald Duck’s Seaside Breakfast on Fridays, Saturdays, and Sundays starting March 29, 2019! Catch some waves on the dance floor with Donald, Daisy and Stitch as you chow down on an all-you-care-to-enjoy brunch buffet.

Pop-Up Disney! A Mickey Celebration is coming to Downtown Disney at the Disneyland Resort and it promises a “whimsically immersive experience” celebrating 90 years of both Mickey and Minnie Mouse. This separately ticketed exhibit will be located near the Downtown Disney District Monorail station in the former space of ESPN Zone.

Disneyland After Dark continues on this year with a third event and it’s decidedly… SUPER. The new Disneyland After Dark: Heroes Assemble event at Disney California Adventure park promises an action-packed line up of experiences with entertainment, character encounters, event-themed food, merchandise and more.

Whenever anybody talks about visiting a Disney Park, prices and cost will always invariably end up coming into the conversation. So, when there’s potential for a FREE bit of Disney magic, it’s always worth a note! Last year, Disney rolled out a fun new freebie in the parks but it takes just a little bit of work!

MORE INFO: Have you been collecting your free Disneyland souvenirs from Esmeralda and Red?

In celebration of the 90th Anniversary of Mickey, Disneyland has debuted a brand new projection show that, on select nights, will also feature fireworks: Mickey’s Mix Magic. The new nighttime spectacle is touted as a high-energy dance party in the park and on weekends and peak days will also be supplemented with fireworks — weather permitting.

Save Money in the New Year